Powering up with the sun

Chow showing photos of some of the company’s projects .

FOR a company established only in 2013, Samaiden Sdn Bhd (pronounced as “sam-aiden”) is no stranger to players in the renewable energy (RE) industry due to its pivotal role.

Located at Sunway Nexis Office Suite in Kota Damansara, the office has nothing to give away its nature of business, save for a shelf of trophies, certificates, framed pictures of its notable projects and a solar panel attached to one side of a wall.

Led by experienced consultants and

possessing a strong background in the industry, the company offers RE services and environment sustainability solutions to residential and commercial areas.

These range from residential solar photovoltaic (PV) end-to-end services from project feasibility, documentation and approvals to design and build, as well as testing and commissioning. From a team of two, the company has grown to 20 employees, working on both small- and large-scale projects across the country as well as in Labuan.

Among the accolades it has received is the Star Outstanding Business Awards 2017 (SOBA) Silver Award for the Best Green Initiative category.

The winning project was the installation of 425kW solar PV on the carpark rooftop of Plaza Metro Kajang, which was completed in December 2015, to generate electricity for the mall’s own consumption.

per month, the mall has managed to reduce its electricity bill by about 20% a month, resulting in a some RM300,000 savings a year.

“I encourage customers to instal solar panels on unused spaces such as rooftops. Besides generating electricity, the rooftop lasts longer thanks to protection from the layer on top of it,” said Samaiden co-founder and director Chow Pui Hee.

The company’s latest project, and one of its biggest, is the large-scale solar PV plant of 24MW in Penang for an integrated construction company.

’s main intake substation via a 6km cable from the project site.

However, it is not as simple as just buying panels and installing them, explained Chow. 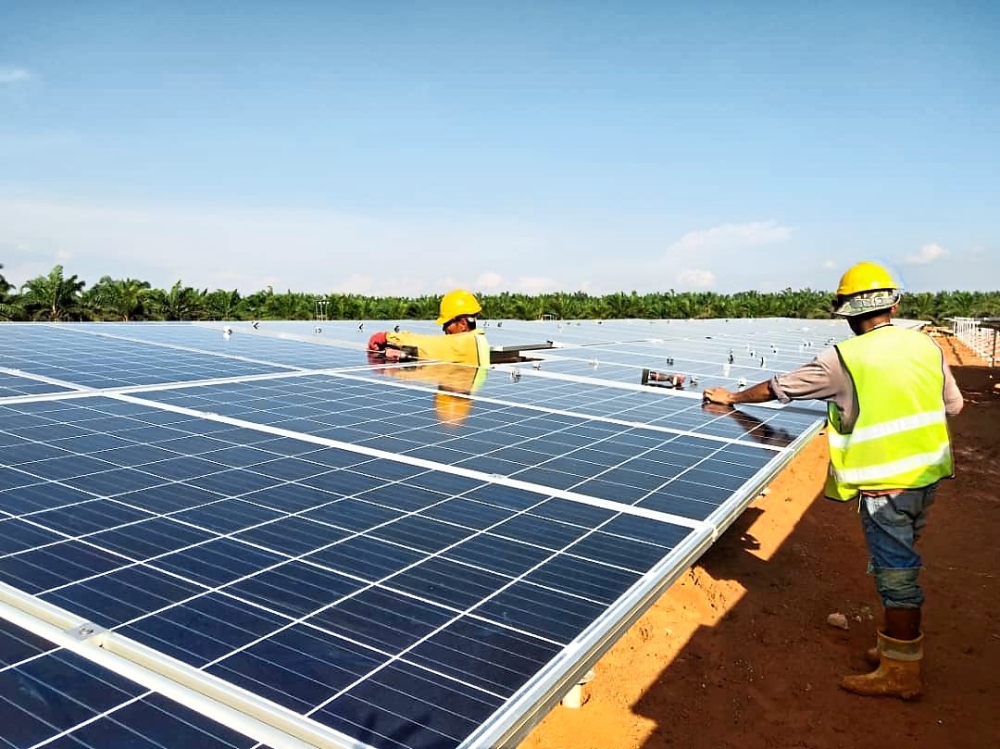 Workers installing the solar panels for Samaiden’s project in Penang.

“A lot of coordination, licensing and approvals are involved. The challenges we faced were in getting approvals from various authorities because developing a solar farm is like developing a residential area. You still need to obtain approval of the Development Order.

“It is a long process, but as a responsible contractor, we want to see this through and assist our clients from beginning to end,” she said, adding that the project was almost complete.

The weather was another challenge, making it difficult to monitor the progress of the solar panels, especially when there was no sunlight.

For the project in Penang, Chow said when construction began in March, it was supposed to be the dry season and as such, a good time to track the solar panels’ performance.

“However, the site could not progress fast enough as it rained daily for the first three months, and subsequently, throughout the entire year.”

This is where Chow comes in with her experience and with her past involvement in the national landfill restoration project.

When a certain piece of land is going to be developed into a residential, commercial or factory area, and found to be a waste-dumping site previously, Samaiden comes into the picture.

Chow, who is also a registered Environmental Impact Assessment subject consultant with the Department of Environment (DOE), said they had done a few projects where the development sits on a contaminated site.

“More often than not, it is an illegal dumping site instead of the sanitary landfill we have now.

“We need to study the piece of land to see if it will pose any risk to occupants, for example, through the release of methane from waste decomposition or affecting the quality of groundwater.

“If it poses a risk, we have to find ways to mitigate it. The DOE requires us to do an assessment report and monitor the condition of the environment of that development site throughout the construction period,” said Chow.

“We are in RE because of climate change, and it is great to also see support from our Energy, Science, Technology, Environment and Climate Change Minister as everyone is moving towards RE.

“We have to constantly educate the public that investing in RE projects does not only involve a lot of money, but they also get returns in energy and cost savings in the long run,” she concluded.