A renaissance: Ling expects the coconut industry to grow as more interest goes into the crop.

LIKE many second-generation business owners, Joe Ling, 37, was somewhat reluctant to return home to shoulder the next phase of the company’s growth. He had a cushy job in Australia and had already earned his permanent residency there.

But continuity at Linaco Group became a concern.

And on hindsight, Ling says it was time to repay the sweat, blood and tears of the first-generation owners.

Linaco was founded by Ling’s father, Richard, in 1992.

Richard, the ninth in a family with 10 siblings, came across an opportunity to become a contractor after various odd jobs upon completing his secondary school education. Business was brisk as he was among the few contractors who spoke English in the 1970s. At its peak, Richard had 26 excavators under his command and was pulling in a monthly income of RM20,000.

However, Richard was weary of the lifestyle of a contractor and was looking for other options to earn a living.

His eldest brother then introduced him to a new technology from the Philippines to commercialise dry coconut powder, which seemed a decent opportunity to explore. He decided to give it a go, chipping in RM400,000 in the venture. Being the youngest shareholder in the company, Richard was entrusted the task to drive the business. He learned everything about the coconut business from scratch and made do with a salary of RM3,000. Higher demand: According to Ling, Malaysia has a shortage of coconuts.

The profits eventually came rolling in and in the early 1990s, when IPOs were all the rage, the shareholders of the company decided to list the company.

But Richard was only in his 30s and wasn’t ready to lead a company under the scrutiny of the public eye. He sought the blessings of the shareholders to exit and start Linaco. Now familiar with the coconut business, Linaco was a breeze for Richard.

After two years, Ayam Brand expressed interest to take up stake in Linaco’s manufacturing plant but was concerned about the company’s lack of succession plans.

“That was when my father started asking me to come back. You know, you hear stories about the second-generation and how you can never resign and things like that. After a year (of my dad asking), I finally decided to give it a try,” says Ling.

His three-year trial period went on and on.

“I realised I’ve been conned for 11 years,” he laughs.

Ling came home in 2007 and learned the ropes of the manufacturing business based in Batu Pahat, Johor. Meanwhile, his older brother, Jimmy, who joined the company a month earlier, took up his seat at the headquarters as group managing director.

Business started growing after that following synergies from its partnership with Ayam Brand and with new customers from the US and China.

When Ling and his brother came into the picture, they brought with them a fresh approach to managing a business. They pushed for newer technology and a more casual culture.

“For example, when I first joined, we were using an external email server. I can’t explain how bad it was. Then I decided to use Office 360.

“Previously, we’d only pay RM200 per year for the email. When I took that up, we had to pay RM4,000 per year. Or course, it didn’t go down very well with accounts.

“This year, I’m pushing very hard for a full-scale ERP to come in. Time is very valuable for us now. I remember my dad telling me, last time, he’d write to Europe and only get a reply two weeks later. In between, he could play golf. But you can’t do that now. You have to reply immediately,” he explains.

Ling, the managing director of Linaco Manufacturing (M) Sdn Bhd – the main subsidiary under the Linaco Group – would like to think that they brought a fun side to the company. They did away with coats-and-ties and employees were allowed to dress down on Fridays. This also helped with bringing in new blood into the company.

The company now also organises more family-based activities and encourages the participation of families at its head of departments’ retreats.

“The value system of the founding family has not changed. My dad has always had a heart of giving.

“But we formalised a lot of these things. We came in as more of a stabilising factor. We really hope to grow the building of society on our CSR side. Right now, for any partnership that we go into, we inform our partners that 10% of the income will go to the welfare of the community,” he reveals.

But it’s not just growing on the humanities side. Ling says Linaco is also looking at growing its brand reach into new markets.

Currently, the company exports its products to some 40 countries. Exports make up about half of the group’s RM400mil revenue.

Coconut-based products currently make up about 80% of its revenue. But Linaco is also looking for opportunities to expand its portfolio into other products.

“We are doing studies on other products. But to get things moving faster, we will go into merger-and-acquisition more than start a new venture from scratch. If we are ready, we’ll start to hunt for such businesses, building synergies with others,” he says.

While Linaco is looking at more possible food-related products to market, he says coconut-based products will remain its core products for the time being.

Its plant in Batu Pahat, measuring 24 acres, is 80% utilised at the moment and processes about 500,000 coconuts a day.

It will be expanding into Indonesia by tapping onto its partner’s operations. This will allow Linaco to focus on marketing its brand there. 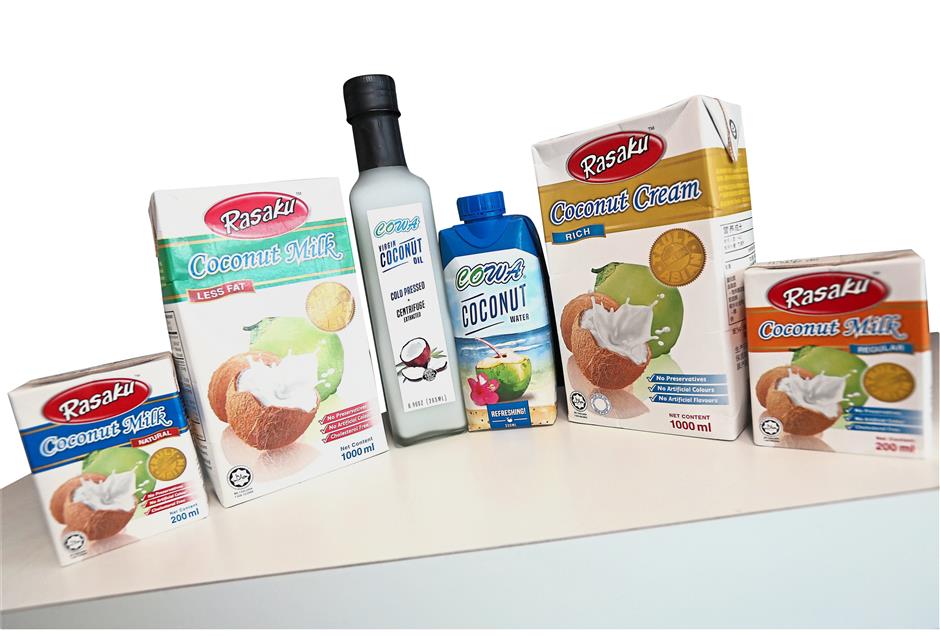 More products: The company diversified into other coconut-based products.

According to Ling, discussions are also under way for the company to work with the Sarawak state government to expand the coconut industry there. They are looking at setting up production a site and possibly move upstream into plantations.

Coconut crops have been suppressed for many years due to the popularity of palm oil in recent years, he explains. To grow the coconut industry, there has to be an industry champion.

“You need to show farmers the yield and create a wave of people and belief that this is something they can plant. They need to be able to have a place to sell their products. They can’t depend only on wet markets,” he says.

But the effort will take years.

Ling says the lack of a coconut board is one of the hindrance to the growth of the industry. Having a board would help regulate prices of coconut and manage the quantity of coconuts for the industry, in terms of import and export. It would also help regulate the quality of seedlings for farmers.

“In the next 10 years, there will be a lot of coconuts coming up because a lot of people have replanted the crop. Now, coconut has more value-add and the value of the coconut increases,” he notes.

He says there is a shortage of coconuts locally as Malaysia imports no less than 200 mill coconuts every year. Prices of coconuts at wet markets are around RM2.50 per nut.

Imported coconuts from Indonesia are valued at about 55sen-60sen per kg.

He also notes that there are more and more studies on the benefits of coconut in the market but cautions the industry to be careful about cutting corners. There are many ways to save cost, but the rule of thumb is to produce products that “I am able to feed my children with too”.

He emphasises that upholding the reputation of the industry is important as a one bad apple does spoil the whole bunch.

“I don’t want to see that on my tenure. Don’t compromise on putting in what you shouldn’t. Make sure you do the right thing,” he adds.

Now that Ling and his brother have taken on the baton, their next role is to groom others to pass on the baton to.

“For the next few years, I need to groom them not just in operations, but in leadership. Previously, they were order-takers. Now, I want you to tell me what you want to do. It’s part of succession planning,” he says.

While he understands that most of his key leaders, who are in their mid- to late-40s, may have concerns of being rendered redundant should they train younger employees, Ling says the passing on of baton has to be anticipated.

“My job is to pull them (managers) closer to me and see it from my view. Then, they’ll be able to see that they’re with me side by side. How can you be redundant if you are on this side?” he says.

He adds that the company’s growing family will require more managers. The Linaco group has some 1,000 people under its employment.

He notes that having a professional line of managers and a family ownership give the company the best of both worlds.