Powerful icon: People walking outside the Battersea Power Station project in London. The property is earmarked to become one of the most exciting retail and leisure destinations in Central London.

His Majesty symbolically turned the power back on in Turbine Hall A, which had laid dormant for over 40 years and will now house part of the power station’s retail offering.

He then unveiled a plaque commemorating the visit, permanently engraving the strong ties between Malaysia and the United Kingdom.

and the Employees’ Provident Fund (EPF), is set to open its doors to the public for the first time today.

Sime Darby Property and S P Setia each have a 40% stake in the Battersea Power Station, while the EPF has the remaining 20%.

Having over 100 shops, bars, restaurants and leisure venues, the Battersea Power Station is earmarked to become one of London’s most exciting retail and leisure destinations.

With an estimated gross development value of £9bil (RM46.78bil), the 42-acre development also includes a number of residential and office blocks.

Under the custodianship of its shareholders, the iconic landmark has been restored to its former glory, and the wider area has been transformed into a vibrant community.

In 2019, PNB and EPF became the long-term commercial asset holders securing the future of the landmark for the future generation.

According to Zakri, the reopening of the Battersea Power Station is a testament of Malaysia’s capability in undertaking major development projects in the UK.

He is confident there will be more similar endeavours in the future.

He applauded the stakeholders for all of their efforts in rehabilitating and redeveloping the Battersea Power Station.

“This is an outstanding achievement and represents the close bilateral, economic and investment ties between Malaysia and the UK,” he added.

Chairman of Battersea Project Holding Company and Sime Darby Property senior independent non-executive director Datuk Jagan Sabapathy said the revitalisation of the icon was achieved through the enduring strength of the Malaysian-UK relationship, the extensive experience of the shareholders, and the unrelenting ambition of the Malaysian people to deliver excellence across the globe.

“Not only has a new destination been created from reviving a disused power station, but a thriving community has already been established since the opening of the first phase of the project, Circus West Village,” he said.

Meanwhile, EPF chief executive officer Datuk Seri Amir Hamzah Azizan said: “The transformation of what was once a coal-fired power station, into a holistic residential, retail and leisure destination that is also capable of supplying sustainable energy, has marked a very important milestone in London’s property development history.”

He said the development would continue to serve its surrounding community and visitors.

“As a long-term institutional investor, we look forward to witnessing Battersea Power Station flourish as a sustainable community and business hub in the next phase of its existence,” he added.

Residents first began moving into the power station in May 2021.

Subsequently, in September 2021, the Northern Line Extension was completed, providing Battersea Power Station with its very own zone one Underground station and making it easily accessible to the public via train.

With the opening of the station, the development is only a 15-minute journey from the West End as well as the City of London.

Battersea Power Station is also accessible via the Uber Boat by Thames Clippers. 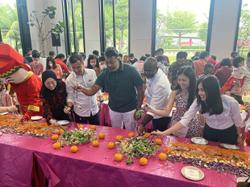 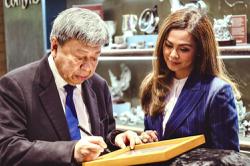