In a statement Tuesday, the retirement fund said it supports the discontinuation of any further withdrawals of EPF savings under the i-Citra scheme for members to ensure members’ retirement future would not be further compromised.

The EPF is a retirement fund that is mandated to safeguard members’ savings for their future retirement needs and wellbeing.

Established since 1951, the EPF is governed by the EPF Act 1991, which stipulates that Account 1 (70% of savings) is designated for retirement, while Account 2 (30% of savings) is meant for discretionary withdrawals aimed at securing a brighter retirement in the future.

“There is, however, no provision in the act that permits withdrawals under natural disasters,” it said.

“The unprecedented scale and impact of the COVID-19 pandemic and recent natural disasters have pushed the country’s current social protection to its limits, and the approach of using EPF savings for emergency needs will certainly cause severe impact as members face very low savings in their retirement years, compounded by other uncertainties such as rising healthcare costs,” EPF said.

EPF said the roll-out of i-Lestari and i-Sinar withdrawals in 2020, followed by i-Citra in July 2021, had been exceptional in nature as these initiatives were extended to meet the urgent cash flow needs of members during the periods of the Movement Control Orders (MCO) and the subsequent economic slowdown.

“As of October 2021, a total of RM101bil has been withdrawn under the three withdrawal schemes.

“This is equivalent to 22% of the total RM530bil of the government stimulus programme as support for Malaysians as a whole,” it said.

EPF pointed out that the withdrawals have inevitably led to 6.1 million members now having less than RM10,000 in their EPF accounts, of which 3.6 million have less than RM1,000, levels at which members are not able to guarantee their retirement.

“The majority of those who have made emergency withdrawals from the EPF were Bumiputera members.

“This is particularly worrying as the numbers show the increasing percentage of members not meeting the EPF Basic Savings threshold of RM240,000 which is the minimum amount members should have when they reach age 55 in order to have a decent retirement,” EPF said.

The retirement fund is also concerned that further leakage would erode its position as a provident fund and trustee to members’ retirement future.

As trustee, the EPF has a fiduciary duty to uphold the equitable interest of all its members, more so when there are still millions of members who maintain their savings untouched and hope for better returns that would see them through their golden years.

Currently, there are more than RM270bil EPF savings that can be withdrawn at any time by EPF members who have reached above age 55 or 60, or those who have more than RM1mil in their EPF account.

“It is feared that such erosion of trust towards the EPF may force these members to withdraw en masse, thus causing negative impact to the country’s markets as the EPF is a major pillar in the holding of capital market and financial investment assets in the country,” it said, adding that addressing old-age income security remained EPF’s prime mandate and guiding principle in the development of the retirement fund’s systemic and actionable aged care strategy.

As the country rebuilds the economy and more people are going back to work, the key focus now is to improve and rebuild EPF savings further.

“The EPF’s focus now is to continue to safeguard members’ savings, in line with its mandate, and bring members back to restoring and rebuilding their retirement savings to ensure they are able to secure a dignified retirement.

“The many forms of Government’s financial aid to individuals and businesses to recover from the pandemic and the recent floods should serve as the much needed relief during this difficult times, hence any future exceptional withdrawals from EPF savings should be deemed unnecessary,” EPF said.

The EPF said it is appreciative that the country’s union and employer organisations, such as the Malaysian Trades Union Congress (MTUC), Congress of Union of Employees in the Public and Civil Services Malaysia (CUEPACS), and the Malaysian Employers Federation (MEF), who had expressed their concerns over the future retirement of workers in Malaysia and called for the discontinuation of further withdrawals of EPF funds.

“The EPF is truly sympathetic to the plight of Malaysians following the unfortunate event of the floods,” it said.

“As a socially responsible organisation, the EPF, alongside other organisations, play an important role towards community wellbeing. In this regard, the EPF, as part of the GLIC/GLC Disaster Response Network (GDRN), has offered its support through resources within its means, which includes an allocation of RM10mil, which comes from savings derived from EPF’s budgeted operational expenditure,” it added.

“The EPF wishes to stress that there will be no material impact on members’ funds or returns as the allocation is from budgeted operational expenditure. The aid will be through in-kind donations only consisting of items needed by those affected and channeled via accredited non-profit charity organisations.”

With close to 15 million members, any assistance through the charity organisations and through the efforts by EPF’s own volunteers will benefit its members and their families directly and indirectly.

“With the measures put in place to support the recovery of the economy, the EPF is hopeful that this will go a long way towards addressing the needs of the rakyat while reassuring members that it remains committed to its mandate and purpose of securing future retirement wellbeing for members,” EPF said. 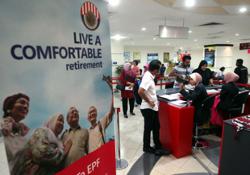