Insight - Singapore wants to lead on crypto, not K-pop pensions

While Singapore has taken a conscious decision to be a key player for crypto-related activity, it doesn't to open its doors too wide, either. (Stacks of bitcoins sit near green lights on a data cable terminal inside a communications room at an office in this arranged photograph in London, U.K., - File pic)

SINGAPORE may have set its sights on becoming the world’s cryptocurrency capital. But its “buyer beware” approach to trading in risky digital assets doesn’t mean anything goes.

A coin that works as a pension plan for BTS, the world’s most-famous K-pop group, is perhaps beyond the pale.

The Monetary Authority of Singapore (MAS), which had earlier allowed Bitget, a popular digital exchange, to issue tokens to Singapore investors pending a full licence, suspended that privilege in July, the Financial Times reported Sunday.

The exchange has attracted controversy by promoting Army Coin, whose goal is to “take care of BTS members for life.”

Hybe Co, the band’s publicly traded management company, wasn’t amused by the unsolicited offer and has threatened legal action, according to the FT.The MAS website simply notes that Singapore Bitget Pte no longer enjoys an exemption from holding a license under its 2019 payment services regulations.

It doesn’t give a reason for its determination. The Monetary Authority of Singapore (MAS), which had earlier allowed Bitget, a popular digital exchange, to issue tokens to Singapore investors pending a full licence, suspended that privilege in July, the Financial Times reported Sunday.

While it’s not an immediate worry – peak trading in tokens using the Singapore dollar has been less than 1% of the average daily turnover on the local stock exchange – a rising share of blockchain-based coins in investors’ portfolios could create a pronounced wealth effect.

Consumption could be “subject to considerable shocks” because of the inherent heightened volatility of such assets, the MAS noted.

Singaporeans are the most affluent they have been in at least a decade.

Their net wealth, which has typically ranged between 3.5 and 4 times gross domestic product (GDP) since 2010, was 4.6 times GDP at the end of the last quarter.

The main source of prosperity on the land-constrained island is residential property, which accounts for about 40% of household assets and 75% of liabilities.

Private home prices have risen almost 9% since the start of the pandemic.

At the same time, higher precautionary savings and fewer opportunities for discretionary spending have squeezed rollover credit-card debt to a new low of 1% of GDP.

A wealthy, liquid household sector in what’s already a rich megalopolis – after adjusting for purchasing power of the local currency, per capita GDP was almost US$100,000 (RM423,300) last year – can attract all kinds of weird financial products.

While the city-state has taken a conscious decision to be a key global player for crypto-related activity, it doesn’t want to open its doors too wide, either.

Of the 170 applicants last year for licences to offer tokenised assets in Singapore, only 70 still remain in the running, including the local units of Coinbase Global Inc and Binance Holdings Ltd, Bloomberg News reported in November. Among the entities that have already won the licence, DBS Group Holdings Ltd’s digital exchange saw assets in custody tripling in just one month to S$600mil (US$440mil or RM1.86bil) by end-October.

Given such high demand, Singapore is bound to be picky about what kind of tokens get hawked to investors.

That means both strong regulation, and tight supervision.

As the financial stability review noted, “Close monitoring of the crypto-asset market will be increasingly important going forward.”

A coin that promises financial support to BTS members so “they do not have to worry about surviving” probably falls beyond the limits of the city’s caveat-emptor approach to financial innovation. — Bloomberg 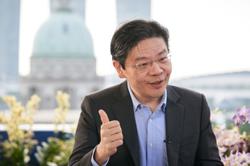