KUALA LUMPUR: Blue chips ended Thursday on a disappointing note amid the record high Covid-19 infections, the impact of restrictions on the economy while a key barometer Public Bank fell below RM4 for the first time after the bonus issue.

Malaysia continued to record high Covid-19 infections. As at noon Thursday, there were 17,170 new cases, raising the total number to 1,078,646 cases. Based on the population of about 32.5 million, this meant the percentage of the population infected is about 3%.

However, the government continued to push ahead with the immunisation programme to achieve herd immunity. So far, 18,946,048 people have received their vaccinations – this number includes the first and second doses.

On the external front, Reuters reported China stepped up attempts to calm frayed investor nerves after a wild markets rout this week by telling foreign brokerages not to "overinterpret" its latest regulatory actions, setting the stage for a rebound in beaten-down stocks on Thursday.

China stocks had their best day in two months on Thursday. The blue-chip CSI300 Index jumped 1.9% and the Shanghai Composite Index gained 1.5%, but for the week, the gauges are still down 4.7% and 3.9%, respectively.

Shenzhen's start-up board ChiNext jumped 5.3%, recouping nearly all of this week's savage losses.

Hong Kong's Hang Seng Index ended Thursday up 3.3%, shrinking this week's loss to 3.7%. The Hang Seng Tech Index, the target of a heavy sell-off earlier this week, surged 8%, but is still down 4.3% for the week.

Reuters reported global benchmark Brent oil prices rose above $75 a barrel on Thursday as crude inventories in the world's top oil consumer, the United States, fell to their lowest since January 2020. 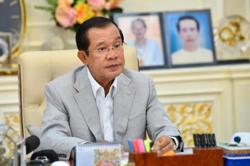