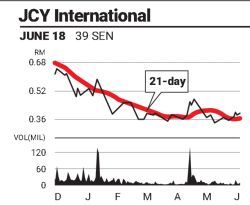 (code: 5161) touched an intra-day high of 41 sen yesterday, suggesting it might bypass the immediate resistance in an attempt to resume an uptrend.

While the share price briefly rose past the 100-day simple moving average (SMA), this did not constitute a convincing breakout and onset of bullish momentum.

Investors should set their sights towards a breach of the 41-sen resistance further afield for an indication of further upsides.

In late April, the stock hit a recent high of 48.5 sen before it it entered into a steep correction that bottomed out on May 21.

Returning to recovery mode since then, the stock is showing some upside bias to reclaim April’s peak of 48.5 sen.

In tandem with yesterday’s gain, the daily trading volume tripled from the day before and rose to its second highest for the week, reflecting an uptick in buying interest in the counter.

On the daily price chart, the SMAs are displaying a growing bullishness as the heads on the short-term 14 and 21-day SMAs and 50-day SMA are turning higher.

Concomitantly, the technical charts are indicating strong momentum although it has tapered since the share price bounced off the resistance yesterday.

The slow-stochastic sits just below the 50% mark, which in crossing would indicate a bullish level of momentum. However, its descending trajectory could be an early indication of consolidation over the immediate term.

On the 14-day relative strength index, momentum is also looking strong at 62 points and rising.

Meanwhile, the daily moving average convergence/divergence line is outpacing the signal line as it ascends in positive territory.

Should the stock fail to make headway, it could remain close to the 50-day SMA currently travelling horizontally near 39 sen. Lower down, the stock finds firmer support at 35 sen. 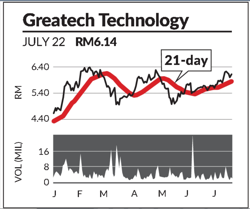 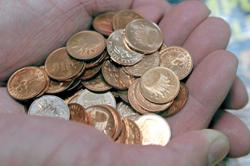