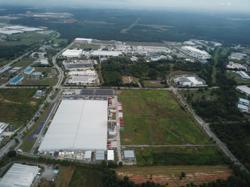 Knight Frank said on Thursday the appointment for the sale of the 63-acre plant in industrial zone phase 2 of Kulim Hi-Tech Park followed Panasonic Group’s plan of ceasing solar production operations in Malaysia.

The plant occupies half of the land, comprising of a single-storey factory annexed to a two-storey office building and other utilities building with an approximately total build-up area of close to 70, 000 square metres.

The plant, a state-of-the-art facility was previously used to cater for the previous operation of solar module manufacturing.

Executive director of capital markets at Knight Frank Malaysia, Allan Sim (pic, below) said the facility was completed in 2013 and it is equipped with high electricity capacity and good floor loading.

Sim added there was readily available nitrogen gas system which is very suitable not just for other solar-related manufacturing production, which can also be easily reconfigured to cater for other uses, the likes of electrical and electronic (E&E), biotechnology and R&D.

“This presents an opportunity for manufacturers to immediately occupy and operate from the existing built facility, whilst having the flexibility to plan for future expansion on the remaining circa 30 acres of land that have yet to be developed, ” he added. The Kedah State Government reported the total foreign direct investment in this hi-tech park was more thanRM20bil as of 2020.

Among the multi-national corporations with facilities there include Infineon, Intel, First Solar, Silterra and more.

Companies like Aspen Glove and Music Tribe (professional audio products & musical instruments manufacturer) announced their entry into the hi-tech park with plants currently under construction and slated for completion by Q3 and Q4 2021, respectively.

The executive director of Knight Frank, Penang branch Mark Saw, added the larger northern region comprising of Bayan Lepas, Prai and lately Kulim as well as Batu Kawan have attracted many E&E and high-tech industries, some of whom have established their presence as early as the ’80s.

“Given there are not many sizable plants available on the market, Panasonic’s plant presents a unique opportunity to either new entrants or existing manufacturing players to expand their footprints in this well-established ecosystem, ” Saw said.