FOR the longest time, Celcom Axiata Bhd has been trying to win back market share to be in the top spot in the local mobile scene.

Trying to dislodge leader Maxis Bhd has been a trying experience for Celcom, ever since the latter took the lead over a decade ago.

Now even the once smallish Digi.Com Bhd has overtaken Celcom in market share.

It is no denying that Celcom has had legacy issues in the past, but that is history and it has dusted that off quite well.

Historically though, Celcom was synonymous with mobility in Malaysia, having been a player since 1988. It was only in 1993 that the floodgates were opened to competition in the mobile sector.

But times have changed. For example, the Covid-19 pandemic - even though it has caused a lot of pain, it has also changed the business landscape with a spike in digitalisation in all facets of life.

Traditional telecoms players globally are now facing more challenges than ever before. Their once safe revenue streams are being disrupted and the threat is not just from their peers but the ever-evolving over-the-top (OTT) players and tech giants. 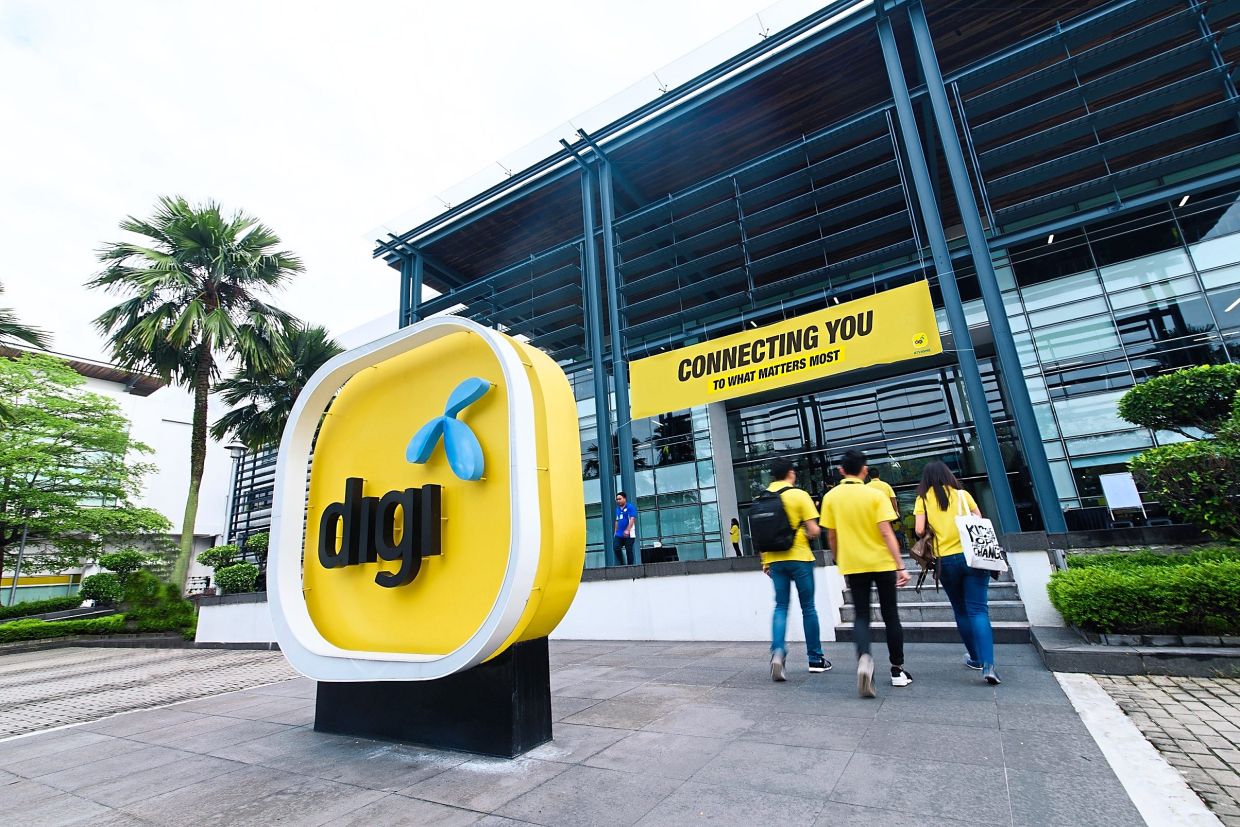 The way ahead: To survive, mobile players like Celcom and Digi need to form partnerships, collaborations and mergers to be of a certain size and scale to compete

These hungry OTT and tech giants are growing at a fast speed and with 5G on the horizon, more solutions, applications and content will be created.

Consumer behaviour is shifting and expectations are greater.

“Change is inevitable for these traditional players and the OTT and tech giants are a significant threat, ’’ says an industry official.

He said for consumers, basic connectivity is a given. What comes on top of that, such as solutions, content and applications, will differentiate one player from another.

Hence to survive, mobile players need to form partnerships, collaboration and mergers to be of a certain size and scale to compete. 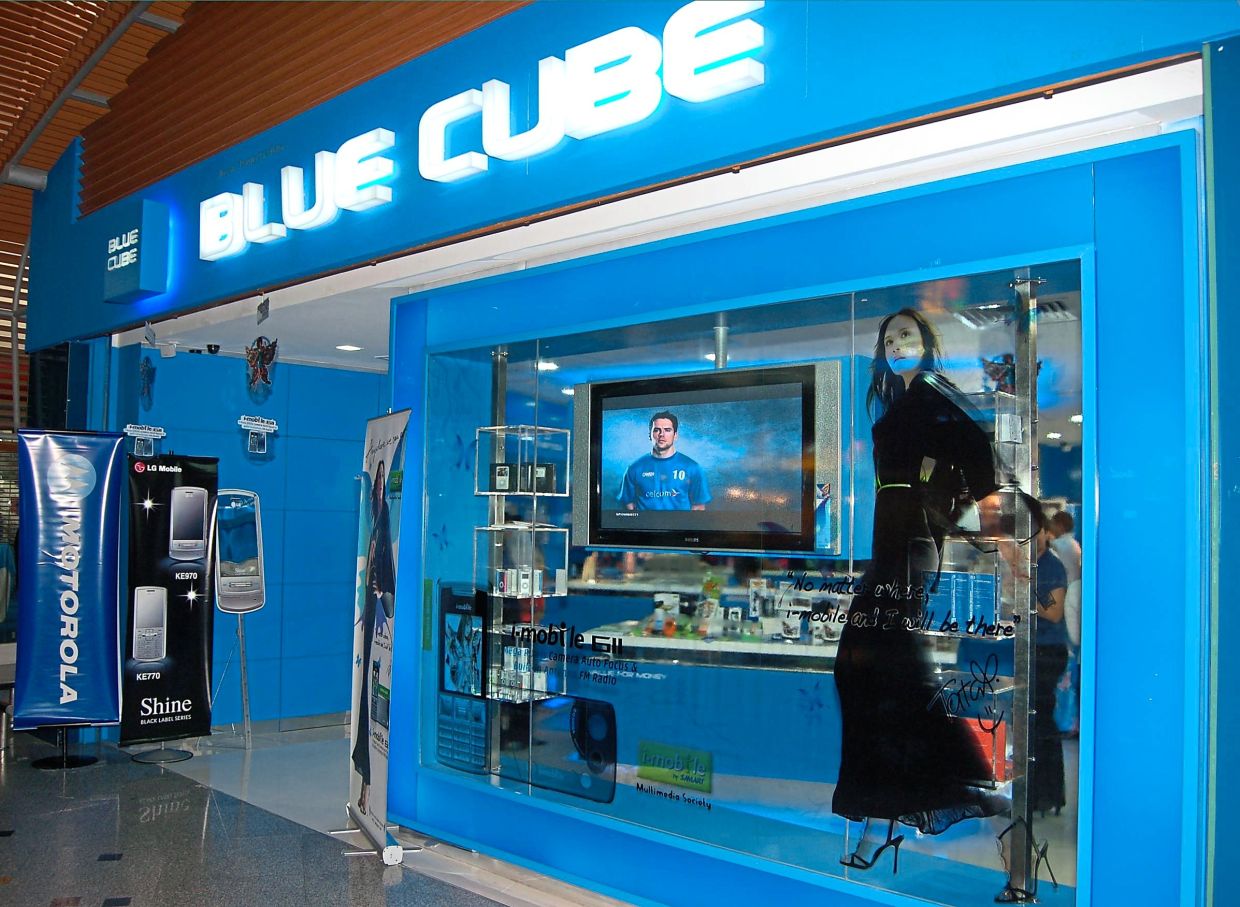 The way ahead: To survive, mobile players like Celcom and Digi need to form partnerships, collaborations and mergers to be of a certain size and scale to compete

That is why Celcom and Digi’s parents – Axiata Group Bhd and Norway’s Telenor ASA – are back at the negotiation table.

They know the threats of the future and are now proposing a new merger with their mobile units in the hope of creating Celcom Digi Bhd (CDB) so that it can better survive in a converged and digitalised world.

“Size matters, not just in their combined (mobile) customer base but in having the financial capability to support Malaysia’s digital aspirations.

“We are preparing for a new reality that goes beyond connectivity, to participate in all the new technologies that 5G will enable, ’’ Telenor Asia head Jorgen C Arentz Rostrup says.

On Thursday, both Axiata and Telenor announced a revised plan to merge their local mobile units. The move is viewed positively by several analysts.

“Should the merger go through, we believe that having one less competitor allows operators to better compete in more sustainable ways via evolving cost efficiencies and therefore, we are positive on the eventuality of a successful deal, ’’ says Kenanga Research. Datuk Izzaddin Idris: There will be no clear leader in this merger. We will be equal shareholders with no one entity over powering the other. This will ensure that healthy marketcompetition remains.’’

Waiting at the altar

This is the second time both Celcom and Digi are standing at the altar in the hope of a marriage. Will they be second time lucky?

The first was on May 6,2019. Telenor and Axiata then announced a mega-merger proposal that got the attention of even the global industry giants.

That deal would have created a local champion with operations in nine markets and over 300 million subscribers across Asia.

But alas, the talks fell through after four months of courtship. The points of contention were never revealed. Suffice to say some did not view Telenor’s leadership role in the merged entity favourably.

“The 2019 exercise had given us a better understanding of both our values and the sharing of common objectives in years to come, ’’ says Axiata president and group CEO Datuk Izzaddin Idris.

Telenor and Axiata never gave up thoughts of merging even after the failed first attempt.

In the third quarter of last year, the parties began talking again.

So, on April 8, the two parties gathered again at the same hotel as in 2019 to announce a merger. Though the merger is on a smaller scale as opposed to the 2019 plans, it comes at a time when the local mobile industry is facing its toughest battle of having no new 5G spectrum and its only reliance is on a single 5G network to be built by the government. 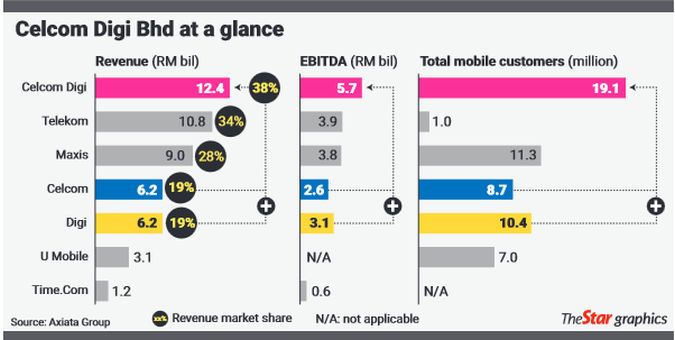 This time around, the merger plan is more palatable, some experts say. The market also seems to think so.

The share prices of both companies rose after the merger announcement. On Friday, the day after the announcement, Digi added 71 sen to close at RM4.46 a share while Axiata added 31 sen to RM4.11 a share.

Both Telenor and Axiata will have an equal share of 33.1% in CDB. Axiata and local institutions in total will hold 51% in CDB.

Management will be led by Axiata with Izzaddin as CDB’s chairman and Rostrup its deputy. The group CEO of CDB has been named as Idham Nawawi from Celcom, and Digi’s Albern Murty will be deputy CEO.

“There will be no clear leader in this merger.

“We will be equal shareholders with no one entity overpowering the other. This will ensure that healthy market competition remains, ’’ Izzaddin adds.

The valuation of the merged entity is unknown for now but it will take over the listed status of Digi which currently has a market capitalisation of RM29bil.

Axiata will get about RM2bil in cash from Digi and Telenor as part of the deal.

Over the next three years, the parties will still invest to strengthen their 4G networks but a merger will bring tremendous savings and efficiencies.

“Why this merger is so important – it is to protect themselves, it allows them to lower their cost and compete with new competitors, and build on new expertise, ’’ notes an industry executive.

AmInvestment Research said assuming there is a 10% reduction in operational and capital expenditure for the combined entity, it estimates potential savings of RM4.3bil over five years.

“This translates to 10% of CDB’s potential market capitalisation of RM41bil. This is based on Digi’s current share price which has been adjusted for the RM1.7bil cash outflow, ’’ the research house says.

Based on data provided by Axiata, CDB will become the biggest player locally, with an estimated annual revenue of RM12.4bil, and a core profit of RM5.7bil. It will have 19 million subscribers or about a 40% subscriber market share.

Gone are the days that telcos can offer RM50 packages and expect consumers to be happy with just 10-20G of data and some voice services. That equation has to change in a 5G environment where the promise of the Internet of Things (IoT), artificial intelligence, analytics and cloud will become dominant. “The consumer of the future wants not just basic connectivity but services loaded with cloud, analytics, cybersecurity, IoT offerings. This is why telcos have to reshape, readjust and reinvent, ’’ notes an industry official.

Reports have indicated that the global OTT market was valued at US$85bil in 2019 and is expected to reach US$194bil by 2025. That is about the time when 5G should be more widespread in many parts of the world including Malaysia.

Just five years ago, voice and SMS represented about 50% of mobile revenue for local players.

But now those revenues are being eroded by OTT players such as WhatsApp, Facebook, Telegram, Zoom and Microsoft Teams.

Apple TV, iTunes and Netflix are also taking some revenues off the table.

OTT content is not limited to big players. Anyone can make OTT content and this will increase with 5G networks in place.

“Arguably, the biggest players today are not the telcos but the OTT and tech giants as they monetise differently, ’’ a report points out.

The OTT and tech giants are able to reach consumers directly and to get into the content, application and solutions game, some global telcos are forming partnerships with the OTTs and tech giants. 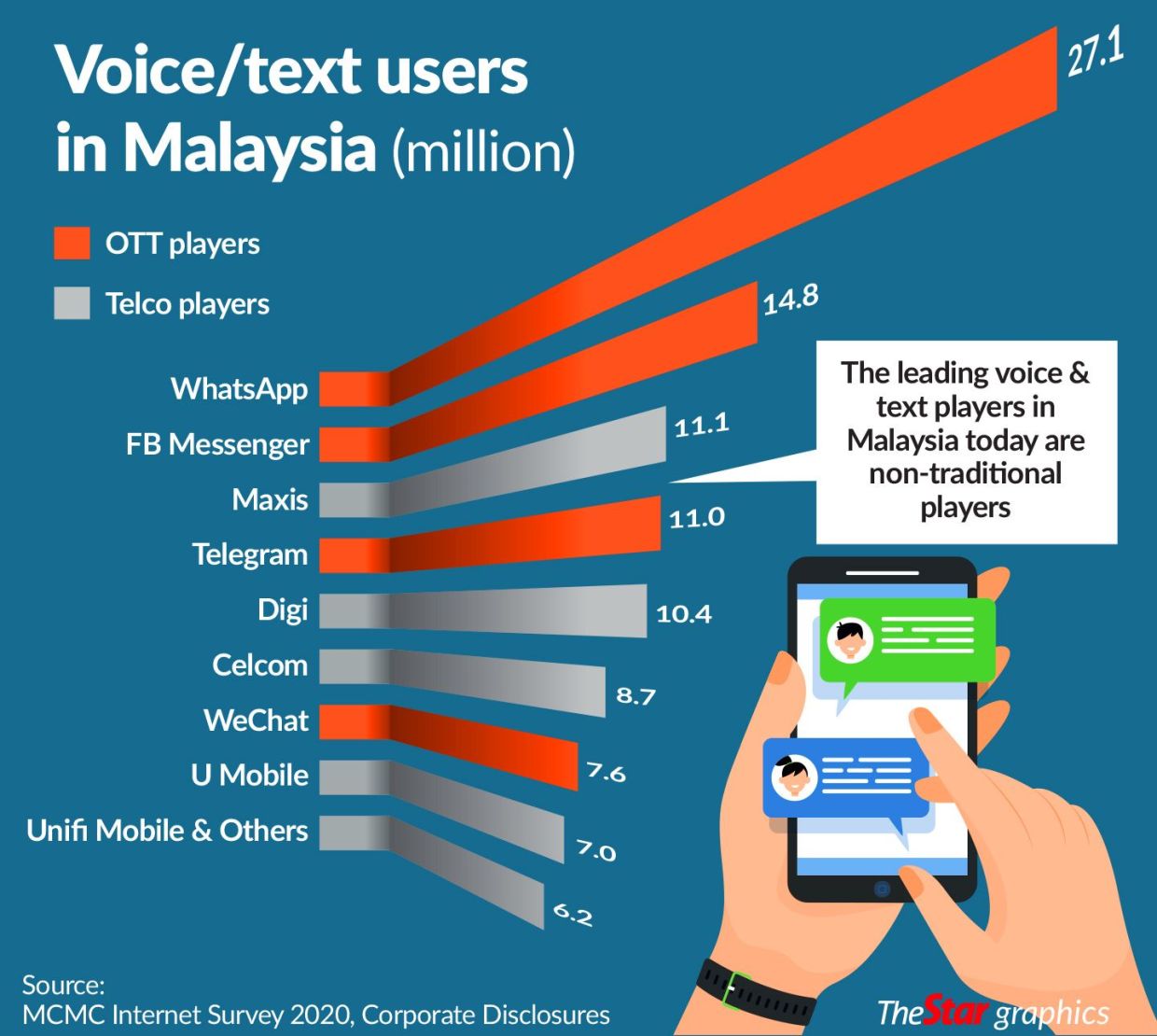 “That is the reason why size matters and with a footprint across Asia, a merger stands a larger chance of getting partnerships with the tech giants, ’’ says an industry expert.

“The expertise that telcos need going forward is consulting, implementation and managed services. These may be new areas and it is the domain of the likes of Microsoft and Accenture, but the shift for the sake of margins is necessary, ’ points out one analyst.

In view of that, Axiata and Telenor agreed to create a world-class innovation centre to catalyse the Fourth Industrial Revolution (Industry 4.0 and IR 4.0) digital transformation, development of 5G use cases and other technology advancement.

While innovation is great, talent retention is critical and people are worried about their jobs given the current pandemic.

“Times are tough and people worry about their jobs. There is a need for added assurances that everyone in Celcom and Digi, totally 3,800 people, will be retained. That reassurance is necessary given the timing, ’’ says the industry official.

Izzaddin has assured that there will be no forced layoffs.

“Instead, we are looking at transition support programmes where we will reskill, upgrade and coach the employees to ensure continuous enhancement capabilities.’’

“No one should be left out just because the merger is vital for future growth and that is what Axiata and Telenor should ingrain into CDS’ growth story, ’’ he says.

Kenanga adds both parent companies have emphasised that they will protect existing employees and that there will be no forced layoffs.

Meanwhile, the promise of 5G includes smart cities to self-driving cars, advanced augmented reality experiences, the ability to connect virtually everyone and everything together be it machines, objects and devices.

The government has entrusted itself to build and provide a 5G network for the players so that they do not have to duplicate networks and save capex. But there will be only one network for all players to ride on.

That means the four major mobile players, the MVNOs, the OTTs, the fixed players, all of which will ride on this super fast network to offer connectivity, solutions, applications and content.

Axiata and Telenor are considering their merger partly also because they will no longer have to invest in network building and can now focus on innovating to spread their revenue streams.

Of course, they still have to invest in strengthening their 4G networks over the next three years.

With so much expectations, experts are beginning to ask questions if one network can serve all the needs of the government, the players, the consumers, the machines, the businesses and the augmented reality experiences.

“There is a lot of optimism with 5G, it will be the engine for Malaysia’s digitalisation going forward. It cannot come short of expectations, ” says an industry player.

“There will be no clear leader in this merger. We will be equal shareholders with no one entity overpowering the other. This will ensure that healthy market competition remains.’’ Datuk Izzaddin Idris 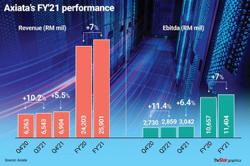