Supramaniam Shanmugam, president of the Malaysian Rubber Glove Manufacturers Association (MARGMA), told Reuters on Friday the container shortage had eased after year-end festivities but the situation had yet to return to normal, with exports by glove makers still facing delays of two to five weeks.

Malaysia, the world's biggest producer of medical gloves, has been racing to meet skyrocketing demand due to the pandemic.

MARGMA said the lead time to deliver gloves to customers had increased by more than six months even as manufacturers ramped up production to cope with new orders.

Industry officials say the situation could return to normal by the end of February, after previously estimating export delays could continue until March.

"There are more empty containers available now. However, there may not be enough vessel space and we need to manage this till February," Shanmugam said.

China saw a container crunch at the end of last year, sending cargo costs to record highs and hampering the ability of manufacturers to meet fast-recovering global goods orders.

The Malaysian National Shippers' Council said its members faced severe container shortages in the second half of last year and were still scrambling to secure space on vessels. It does not see the situation easing this quarter.

The shortage drove up freight rates by 300%-400%. The council's Chairman Andy Seo said higher rates were becoming the benchmark with exporters ready to pay a premium.

"Members have indicated that container booking requests get cancelled by the shipping lines at the very last minute unless manufacturers were able to pay higher freight rates, he said. 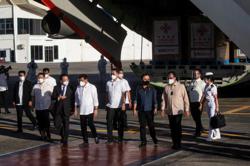