Local quota for ECRL project up

PETALING JAYA: The construction and building materials’ sectors have been given a shot in the arm with the local participation of the civil works for the East Coast Rail Link (ECRL) project being set in stone at 40%. 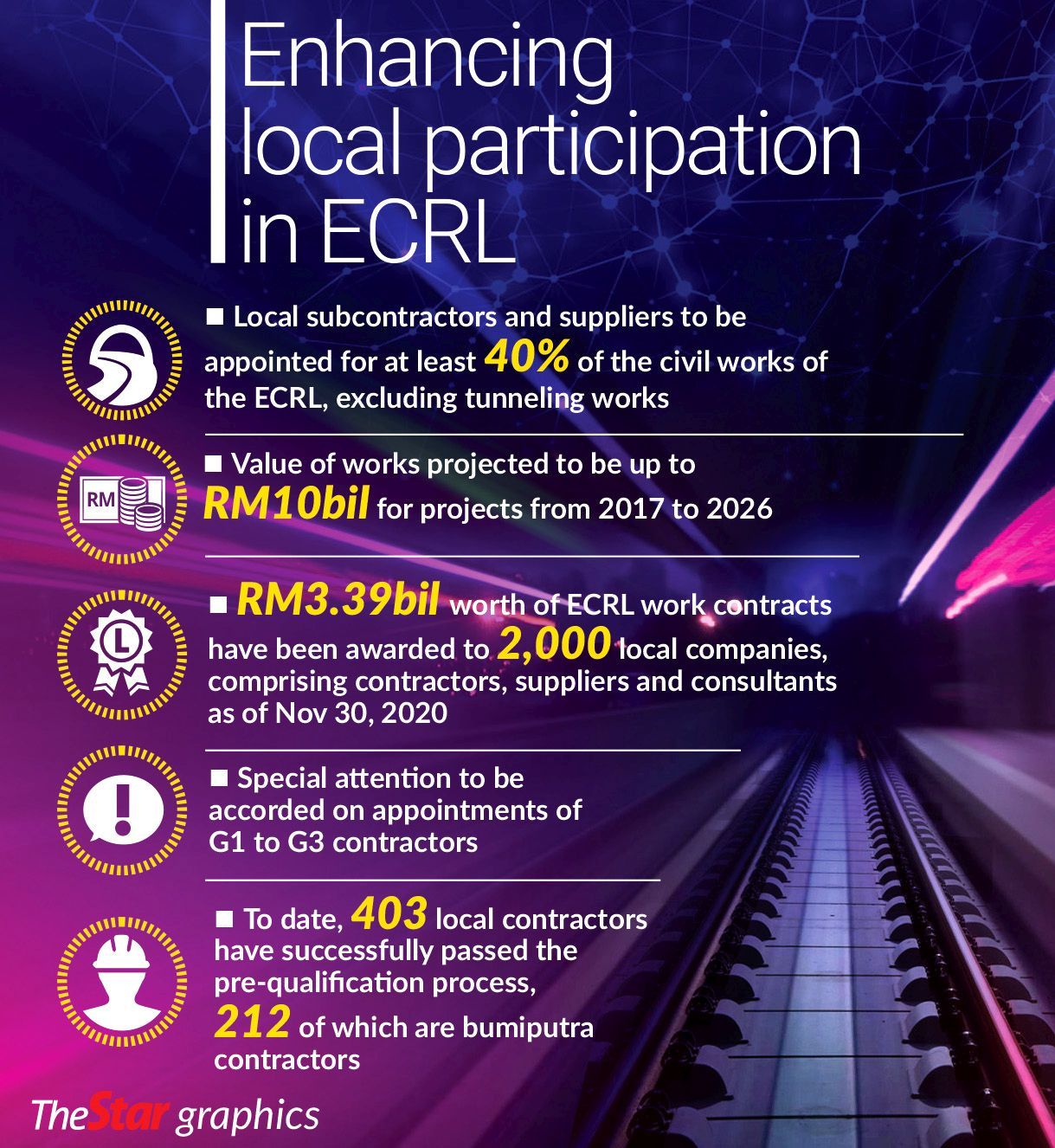 This will now see local subcontractors and suppliers being appointed for at least 40% of the civil works, excluding tunneling works, estimated to be up to RM10bil for the implementation of the project from 2017 to 2026.

CCCC has also agreed to accord special attention to the appointment of small contractors from the Grades G1 to G3 categories that will directly benefit them and the overall construction industry players in the country.

MRL chairman Tan Sri Mohd Zuki Ali said since the implementation of the project from 2017 until Nov 30,2020, a total of RM3.39bil worth of ECRL work contracts, including permanent and temporary civil works, have been awarded to almost 2,000 local companies comprising contractors, suppliers and consultants.

Works in Pahang accounted for RM1.69bil, followed by Terengganu and Kelantan at RM1.4bil and RM300mil, respectively.

To date, 403 local contractors have successfully passed the pre-qualification process and have already been registered in the online registration system.

Of these, 212 companies are bumiputra contractors or 52% of the total pre-qualification.

“As long as our local contractors have the ability, technical knowledge and can offer their services at competitive prices, we do not foresee any issues that would hinder CCCC from appointing the local contractors.

“Our hope is for the ECRL to become one of the government projects that can demonstrate the ability of local contractors in implementing and meeting the high standards of any large-scale infra project.

“With the participation of local contractors, it will not only act as a stimulus to the local construction sector, but we will also work to ensure as much technology transfer as possible, as the ECRL project is expected to be one of the most challenging engineering and construction projects in Malaysia, ” said Zuki, adding that they hoped local contractors could benefit from the transfer of knowledge and technology which will ultimately maximise the impact of the government’s investment in the challenging economic environment currently.

To further enhance and monitor the achievement of local participation, a Special Committee for the Participation of Local and Bumiputera Contractors of the ECRL Project has also been established and chaired by the secretary-general of the Transport Ministry.

“Local companies that have been appointed by CCCC are also eligible to apply for project loan financing from SME Bank through a tripartite memorandum of understanding which was inked on Nov 18 in 2019 between MRL, CCCC and SME Bank.

“Through this initiative, local contractors are also supported by financing options to ensure implementation of works is as per schedule and meets the high standards set by CCCC, ” Zuki said.

“We reiterate our positive call on the sector, given the expected robust earnings recovery prospects on the resumption of construction activities as well as the potential continuation and rollout of the local mega infrastructure projects, ” he told StarBiz.

Khoo added that overseas project wins could also help to provide additional catalysts to local contractors and cushion any negative impact arising from the delays in project rollouts.

“These would also help to re-energise the order book for construction companies under our coverage.

An analyst from a bank-backed research house said the RM3.39bil that has since been awarded implied that a balance of RM6.61bil will be covered for all three sections of the project, presumably including Section C that is currently being realigned.

“I guess the bigger question now is how fast they can award the implied balance and what scopes are ready to be awarded this year.

“So now, how big a subcontract package can each large civil works contractor secure?

“There are many contractors vying for the packages, especially the smaller and bumiputra players, ” the analyst said.

The ECRL project is now slightly ahead of schedule at a 19.68% completion rate, driven mainly by construction works in Section A (Kota Baru-Dungun) and Section B (Dungun-Mentakab).

MRL has targeted a completion rate of 30% by the end of the year.