AFTER the recent euphoria over glove stocks, business writers and journalists tend to compare the market capitalisation of some of these glove companies with other sectors or companies.

Recently, there were comparisons made between Top Glove Corp and Maybank as the former is not to far away from taking the top spot as Malaysia’s largest market capitalisation stock.

But, guess what? The property sector’s market capitalisation is about to be overtaken by another monster and this is non other than the size of the overhang of the property market itself!

Based on data that was released by the National Property Information Centre (Napic), Malaysia saw the total overhang rising by 10.7% and 13.2% in volume and value to 63,063 units worth RM47bil as at the end of the second half of 2020 respectively, against 56,988 units valued at RM41.5bil a year ago.

With the total property overhang rising rapidly, the Malaysian property market is now at an infliction point as the market’s overhang value will soon overtake the entire market capitalisation of all listed property company, which stood at RM49.5bil as at Oct 1.

The level of overhang in the market, both in residential and commercial segment as well as incoming and planned supplies, continues to paint a bleak and gloomy picture for the property industry as a whole and if authorities, who are more busy politicking than anything else, do not take action drastically, we are in for a point of no return for the industry as a whole.

We will be saddled with this huge oversupply for years to come, we will continuously be faced with a challenging market conditions, while for investors, the property market may not be able to exhibit its defensive nature and act as a hedge against inflation as oversupply will not only limit future price growth but will result in massive oversupply over demand, resulting in stagnant or falling property yields.

Compared with a year ago, the number of overhang units actually declined by 3.5% but in terms of value the 2Q 2020 figure is still higher by 1.4%.

Overhang units are concentrated in the condominium/apartment segment, which accounted for 51.4% of the total, followed by two- to three-storey-terrace homes, which represented 24.9% of the total. In terms of price segment, 10,032 units were below RM300,000 threshold and these, despite being affordable, remain unsold. Hence, even the affordable supplies are not being taken up by the market and this alone accounts for some 31.7% of the total overhang units.

In the commercial segment, both volume and value reached new record highs at 29,941 units worth some RM24.7bil.

The increase in the commercial segment is staggering as the jump, both in units and value, were in double digits at 16.9% and 21.6% y-o-y respectively.

Table 1 summarises the current market status in the form of existing stock, future and planned supply. From here, we can observe that both the service apartments and SoHo sub-segment have a huge future supply to the extent that they are more than double of existing stock level.

For residential, due to the large base, the future supply represents just under 16% of existing stock.

The next question is, of course, where are these located and how bad is it in terms of future supply?

Table 2 summarises the locality of these sub-segments by states. 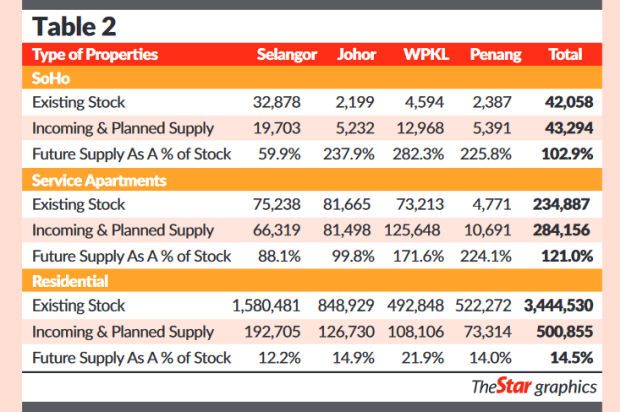 For SoHo and service apartments, the total existing stock from these four localities alone is equivalent to 97.2% and 89.2% of Malaysia’s existing stock level respectively while for the residential segment, the 3.444mil units represent almost 60% of the overall national supply.

Naturally, as the nation’s population is concentrated in these three states and Kuala Lumpur, the future supplies too are concentrated at the same localities.

For the residential segment, the future supply from these four localities represent some 55.4% of the nation’s total, while in terms of concentration, future supply seems to be concentrated in WPKL with upcoming supply alone accounting some 21.9% of existing stock.

While the residential segment data is not too alarming, the data that represent the service apartments are rather mind-boggling while that of the SoHo sub-segment, although relatively high in terms of percentages, it is not significantly high in terms of number of units due to the low base.

Nevertheless, we are still expected to see some 43,294 units in future supply, which is more than double the current stock level for SoHo sub-segment in these four localities, which makes-up just over 90% of the national future supply.

All in, future service apartment supplies from the four states of 284,156 units represent some 91.4% of the nationwide supply.

Other than the future supply, market naturally needs to be concerned too on properties that are unsold and are either under construction or not constructed. In the residential segment, there are some 88,772 units under this category, which represents just 1.5% of existing stock.

But for the service apartments and SoHo sub-segment, units that remained unsold and are under construction or not constructed stands at 46,594 units and 4,531 units respectively. This based on existing stock level is approximately 17.7% and 10.5% of existing stock level.

In summary, we have seen overhang numbers rising rapidly over the past few years and continue to do so. Efforts to address the overhang with Home Ownership Campaigns or even other measures don’t seem to work as developers are over-building without proper analysis of actual market demand.

With value of overhang fast approaching the total market capitalisation of the listed property companies and with huge future supply in the pipeline, it will take years before we see market returning to a healthy state.

Although not all the overhang can be said to be linked to listed property companies, one can safely assumed that significant amount of the overhang, both in volume and value, are those developed by listed companies. The property market is indeed at an infliction point and if nothing is done by the authorities to clamp down on future supplies, we are in for a shocking outcome in years down the road.

Pankaj C Kumar is a former head of research and chief investment officer. Views expressed here are his own.