Record low: Economists are expecting Bank Negara to lower the OPR by another 25 basis points to a record low of 1.5%.

MALAYSIA will likely see its interest rate cut again by another quarter of a percentage point next month, according to some economists.

With inflationary pressure expected to remain subdued, while the economy is relatively weak, they note, there is a good chance that Bank Negara will lower the benchmark overnight policy rate (OPR) by 25 basis points (bps). This would bring the benchmark used by financial institutions to set their lending rates to a new record low of 1.5% from the current 1.75%.

Such a move could further benefit the local equity market as individual investors will continue to put more of their money in stocks for better returns, instead of letting it sit in bank accounts when deposit rates are on a declining trend, one broker tells StarBizWeek.

“This means we will continue to see robust retail participation in the equity market... but sector-wise there will be winners and losers, ” he says.

“For instance, banking stocks will be hurt in the event of another rate cut, but automotive, property and REITs (real estate investment trust) will benefit, ” he explains.

Bank Negara’s Monetary Policy Committee is scheduled to meet and decide on the OPR on Sept 10. This will be the fifth of its six meetings this year.

So far this year, the OPR has been slashed four times by a total 125bps.

Expecting the central bank to ease again next month, CGS-CIMB Research says concerns over the persistence of a deep negative output gap could prompt Bank Negara to cut the OPR by 25bps to 1.5%.

“We expect inflationary pressure to remain subdued for an extended period amid significant slack in the economy and challenging labour market conditions. This leaves sufficient headroom for a more accommodative monetary policy, ” the brokerage explains in its recent report.

Malaysia’s economy shrank 17.1% in the second quarter of 2020 following the implementation of the movement control order (MCO) to contain the spread of Covid-19 in the country. In the preceding quarter, the country posted a marginal growth of 0.7%.

Inflation, on the other hand, remained in negative territory, with the consumer price index (CPI) declining for the fifth consecutive month in July due to lower fuel prices. The CPI fell 1.3% last month, bringing the average CPI in the first seven months of the year to -0.9%.

TA Research says it expects the CPI to continue falling this month at an estimated rate of 1.2% on assumption of continuous decline in the transport index, albeit at a more moderate pace.

“On the monetary policy, we expect central bank to cut the OPR by another 25bps in the next MPC meeting to cushion against downside risks. This will bring the rate to 1.50%, the lowest in history, ” it says in its report.

AmBank Research, on the other hand, says it has factored in a 70% chance of a 50bps OPR cut in September, bringing the benchmark interest rate down to 1.25%.

“The global accommodative monetary environment provides room for Malaysia to cut the OPR again to support the economy, which is currently recovering from the Covid-19 fallout, another rate cut could perhaps speed up the recovery process, as cheaper borrowing costs tend to encourage more spending and investment, ” one analyst with a local brokerage says.

Conversely, there are several brokerages that expect the OPR to be maintained at 1.75% through 2020.

Maybank Investment Bank Research (MIB), for instance, says it expects a “dovish pause” by Bank Negara for the two remaining MPC meetings of the year to preserve monetary policy space amid the ongoing implementation of the RM295bil economic stimulus and recovery measures which Bank Negara expects would contribute 3.4 percentage points to the gross domestic product growth.“There is room for further OPR cut(s) if needed, even at current record-low level, especially in view of the deflation environment. Real OPR are high on a monthly and year-to-date basis compared with historical level/range, and Bank Negara is not averse to a limited period of negative real OPR in the past, ” it says.

JF Apex Research is also of the view that the current OPR will be maintained at 1.75% for the rest of the year, as it expects economic activities to gradually recover, with the reopening of businesses as well as the implementation of fiscal stimulus packages to spur private spending.

Similarly, Kenanga Research notes although it sees ample room for Bank Negara to embark on a rate cut should the economic recovery pace weaken due to fears of a new wave of Covid-19 infections, the chances of doing so is less now.

This is given the aggressive monetary policy easing throughout the first half of 2020; the RM295bil stimulus package allocated to support the economy, as well as the extension of the targeted moratorium period.

Therefore, it says, it sees a higher probability that Bank Negara would keep the OPR unchanged next month. 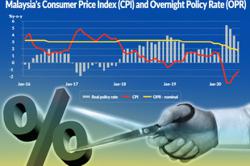