This would help to limit the increase in banks’ gross impaired loans, while enabling banks to restore cashflow generation from the majority of the SME and consumer loans. This was the feedback following Bank Negara’s session with banking analysts on Thursday, the research house said.

PETALING JAYA: Banks will focus on targeted assistance upon the expiry of the loan moratorium in September, whereby the moratorium will only be offered to borrowers needing financial assistance, according to CGS-CIMB Equities Research.

It said in a note yesterday that this would help to limit the increase in banks’ gross impaired loans, while enabling banks to restore cashflow generation from the majority of the SME and consumer loans.

This was the feedback following Bank Negara’s session with banking analysts on Thursday, the research house said.

“The central bank said it had no blanket restriction on banks’ dividend payments, which is positive, in our view.

As is usual practice, banks’ dividend payments will continue to be subject to Bank Negara’s approval.

“Approval is granted subject to several factors, including the capital buffer based on various stress tests by Bank Negara, ” it said.

CGS-CIMB Research said when the loan moratorium started in April, the take-up rate was about 90% for both household and SME loans.

However, the rate fell (to about 85%) as some borrowers’ income streams were restored since the relaxation of the movement control order.

“This is a positive development as it shows there is an increase in the percentage of borrowers that have managed to endure the Covid-19 headwinds even without any financial assistance.

“There has been a relaxation of the rescheduled and restructured (R&R) loans since September 2019, whereby banks do not have to classify some of the R&R loans as impaired for genuine cases (borrowers experiencing temporary financial difficulties while their businesses remain viable in the long term, in our view).

“Hence, the increase in R&R loans during the economic downturn in 2020 would not lift banks’ gross impaired loan ratios, ” it poined out.

CGS-CIMB Research has retained its neutral call on banks as it thinks that banks’ share prices would be supported by a higher dividend yield of 4.2% in 2020, relative to 2.9% for the market.

“We see limited downside risk to the yield as Bank Negara said there will be no blanket restriction for dividend payments, ” it said. Banks to focus on targeted aid after moratorium 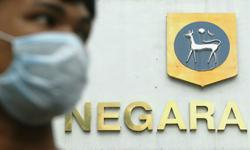