IPI expected to improve after record plunge in April

Chief Statistician Datuk Seri Dr Mohd Uzir Mahidin (pic) said yesterday the April IPI was badly impacted by the movement control order (MCO) which was put in place to prevent the spread of the Covid-19.

PETALING JAYA: Malaysia’s industrial production index (IPI), which plunged by a record 32% in April, is expected to improve in the coming months as the government allowed more industries to resume operations in May.

Chief Statistician Datuk Seri Dr Mohd Uzir Mahidin said yesterday the April IPI was badly impacted by the movement control order (MCO) which was put in place to prevent the spread of the Covid-19.

The MCO came into effect on March 18 and April saw the full impact of the MCO.

The plunge in the IPI was worse than a Bloomberg survey of a 15.4% decline.

Reuters reported the plunge was also nearly double the drop of 18% forecast by analysts surveyed by Reuters and steeper than a decline of 17.6% in January 2009, then the biggest recorded fall, Refinitiv Eikon data shows. In March, the index had fallen 4.9%.

Manufacturing sector output in April 2020 contracted by 37.2% on year-on-year (y-o-y) basis after falling by 4.1% in March due to a significant drop in non-essential services industry and low capacity utilisation of below 50%.

The decline in the manufacturing sector was mainly weighed down by the drop in the export-oriented industries.

He added the mining sector output declined by 19.6% on-year due to the decrease in crude oil and condensate index (-20.2%) and natural gas index (-19.0%). The electricity sector output decreased by 19.2% in April from a year ago.

MIDF Research said the mining sector in particular contracted by -19.6% on-year mainly due to lower oil prices following the oil price war and weak demand due to the movement restrictions worldwide.

“A severe contraction was largely expected for the month as Malaysia had its full month of MCO where most of the businesses were out of operations and consumers stayed home.

“Looking ahead, we expect IPI performance to remain weak in upcoming months albeit at improving rate, in line with easing restrictions and opening up of the economy, ” the research house said in a report yesterday.

MIDF Research said the drop in IPI in April was in line with external trade performance.

Malaysia’s exports dived -23.8% on-year in April, the hardest fall since September 2009, manifesting the impact of a full month of MCO. 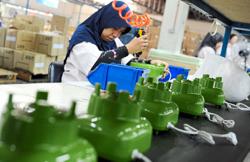 The week ahead- IPI figures 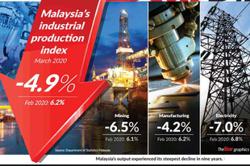