KUALA LUMPUR: Malaysia reported a 17.1% increase in unemployed persons to 610,500 in March this year, the fallout from the Movement Control Order (MCO) as the government sought to minimise the impact of the Covid-19 pandemic.

In a statement issued on Friday, Chief Statistician Datuk Seri Dr Mohd Uzir Mahidin said this increase when compared with 521,300 a year ago was due to the adverse impact of the MCO.

During the same period, employed persons decreased by 0.7% to 15.23 million persons. Out of the number, 2.81 million were own account workers such as small traders/ entrepreneurs (pasar tani/ night market/ catering/ freelancers etc) who earn daily income/ wages.

“They were exposed to the risk of unemployment and work loss that can affect income during the MCO because partly were unable to work or run their business.

“Meanwhile, there was a significant increase in the number of employed persons who were working less than 30 hours per week to 1.12 million persons as compared to 366,300 persons recorded in February 2020. 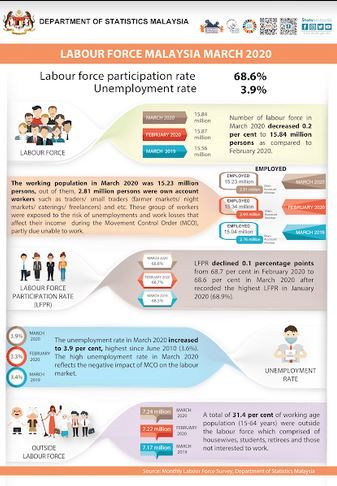 “The unemployment rate was the highest ever recorded since the second quarter of 2017. The number of unemployed was 546,600 persons, increased 5.8% as compared to the same quarter last year.

“Out of the total number of unemployed, graduate unemployment accounted for 29.3%. The increase in the unemployment rate can be attributed to the negative impacts caused by the MCO.