The Nepali government has banned them from returning home for fear they could spread the virus in a country that has so far registered only 30 cases and no deaths and is ill equipped to deal with a major epidemic.

KATHMANDU: Nepal's top court has ordered the government to bring back vulnerable migrant workers stranded abroad in the coronavirus crisis after the country barred its own citizens from returning.

Up to 2.6 million Nepali migrants are estimated to be in the Gulf, Malaysia and South Korea and labour rights activists say many have lost their jobs due to coronavirus lockdowns in those countries, leaving them highly vulnerable.

The government has banned them from returning home for fear they could spread the virus in a country that has so far registered only 30 cases and no deaths and is ill equipped to deal with a major epidemic.

But the Supreme Court, ruling on a petition filed by a human rights charity, said the government could not sit by while its own citizens struggled.

"The government... must take additional and effective steps to ensure the security and good health of its migrant workers," the judge said in her order on Thursday, requiring authorities to allow them to return or provide help where they are.

Foreign Minister Pradeep Kumar Gyawali said the government was assessing the situation and collecting reports about the migrant workers' conditions.

"We are sensitive to the interest of our nationals... and will fulfil our responsibility to ensure their welfare," he told the Thomson Reuters Foundation. 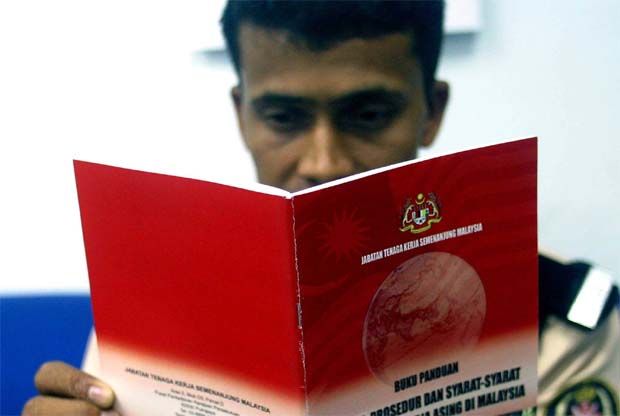 Nepali security guard Kul Bahadur, 24, reads the guide book by the Labour Department that containes policies, procedures and regulations governing the employment of foreign workers in Malaysia. - The Star filepic

The People Forum for Human Rights (PFHR), which filed the petition, said the lives of many Nepali migrants were badly disrupted by lockdowns, movement restrictions and the closing of businesses in countries where they work.

When Nepal ordered the lockdown, one man jumped into a river on the border with India and swam to the other side to get back home, only to be arrested by Nepali police.

A photograph of the man being taken by police in his underwear has been shared widely since, underscoring the desperation of Nepali migrants.

"This order will force the government to be serious about protecting the lives and interests of migrant workers," said Sudip Devkota, a lawyer for PFHR, which provides free legal aid to migrant workers.

Gyawali said the government would report to the Supreme Court with its findings on the condition of migrant workers within 15 days. - Reuters