Foo: If you look at these high-rise units like the SoHos and serviced apartments, if there is no major price correction, I don’t think it would even clear in the next five years.

KUALA LUMPUR: The property overhang dilemma in the country is a multi-year problem that still needs a lot of intervention to be resolved.

CBRE|WTW managing director Foo Gee Jen said the overhang was caused mostly by the oversupply of high-rise units, mainly serviced residences and small office, home offices (SoHo) units, adding that it could take more than five years for the unsold, high-rise units to be absorbed into the market.

“If you look at these high-rise units like the SoHos and serviced apartments, if there is no major price correction, I don’t think it would even clear in the next five years because you really have to provide drastic measures in terms of pricing and to be able to entice people to buy.

“As for the landed unsold residential units, provided the market is trading upwards, the economy is still growing and we do not face a recession, this stock may take two years to clear,” he said at after a briefing yesterday on the company’s 2020 real estate market outlook. 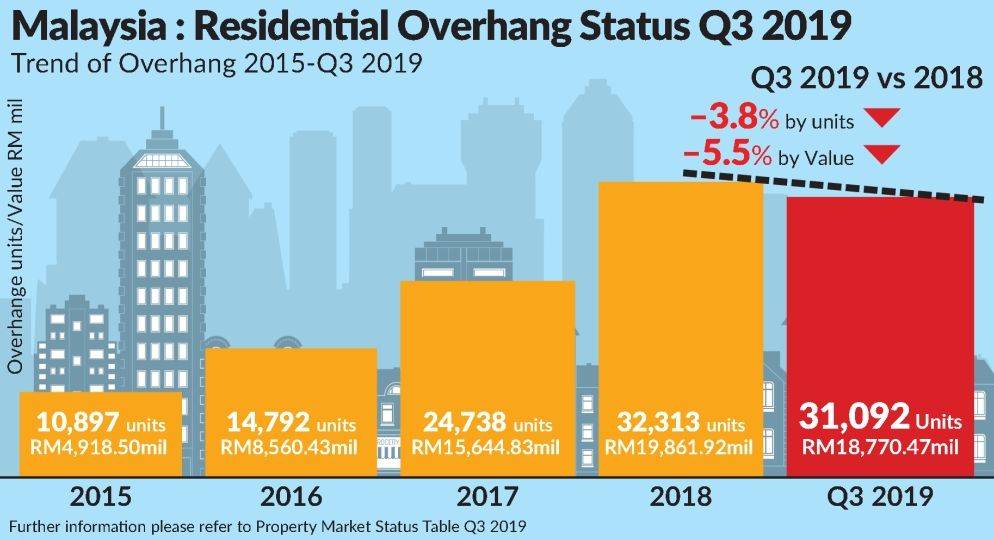 According to the National Property Information Centre, the number of unsold homes reached 31,092 units at the end of September 2019, compared with 30,115 units in the previous corresponding period.

The value of unsold residential units dropped to RM18.77bil in the third quarter of 2019 compared with RM19.54bil a year earlier.

“Johor recorded 15,000 units of unsold high-rise stock last year. The situation escalated during the 2012 to 2014 period when there was an influx of developments, especially from China developers.

“We think the game changer will be the RTS. Singapore has a population of 5.7 million people. With property prices being expensive, Johor offers an affordable alternative.

“So even if 5% of the population is considering purchasing property in Johor, the overhang situation can be resolved within three to five years of the RTS being operational.”

Foo said the overhang issue in the country, which has not eased despite the success of the Home Ownership Campaign (HOC) last year, could be resolved if property prices are reduced.

He said Malaysia should emulate European countries and give buyers the right to negotiate property prices.

“Consumers should be able to dictate the price. If you look at London or any major city in Europe, when you walk into a developer’s office, you actually can bargain with them despite whatever price is listed.

“You can bargain, even in the primary market, but it’s never happened in Malaysia. You have to take it or leave it.”

Foo emphasised that there was “no such thing as fixed prices” when buying homes in European cities such as London.

“Over there, if you think the price is not a good deal, you leave it. In a month when you come back, you never know, you might get a better price.

“It’s your money. You decide what you want to pay for it. I believe there will come a day when the Malaysian consumer is given that right. It can be achieved by having better consumerism and not adopting a herd approach of must-buy, queue overnight.”

He said the government should leave it to the market to decide, rather than push for more waivers and exemptions.

“The only straightforward way to clear the overhang situation is to reduce the price as it’s a demand-supply situation.

“End of the day, I need to look at the yield that you’re getting from buying the property. If I’m getting less than 3% yield, then I’ll just do the easy thing, which is to just put my money in the bank.”

If there is no capital appreciation over the years, the only thing to do would be to reduce the price to match the yield, said Foo.

To address the overhang problem in the country, the government kicked off the HOC in January last year, a six-month initiative that eventually got extended until year-end.

All the properties at the HOC also came with a minimum 10% discount and stamp-duty waivers on the instrument of transfer and the instrument on loan agreement, as well as additional incentives.

The campaign proved successful, having generated total sales of RM23.2bil in 2019, surpassing the government’s initial target of RM17bil.

Separately, Foo said the local property sector could experience a minor dip in volume growth in 2020 following the end of the HOC at the end of last year.

“Because the HOC is not being extended, we may see a year-on-year dip in volume. The landed residential sub-sector will either be flat or grow 5%.

“We also believe there will be a correction for high-rise properties, especially those above RM1mil.”

According CBRE|WTW‘s Real Estate Market Outlook 2020 report, the Klang Valley’s residential sector reported an 8.7% year-on-year growth in transactions to 15,973 units and 4.2% to RM8.33bil in value as at the third quarter of 2019.

Close to one-third of the overhang in the Klang Valley was made up of residential properties priced between RM200,000 and RM500,000.

As for the retail sector, the report said this sub-segment is expected to remain “status quo” with generally healthy retail revenue and sustained shopper footfalls; same occupancy and rental rates.