PETALING JAYA: The office buildings in the 70-acre Tun Razak Exchange (TRX) and Permodalan Nasional Bhd’s Merdeka 118 are expected to separate themselves from the rest of the Klang Valley in terms of design, quality and tech advances. Not to mention aesthetics.

In TRX there is pure office block Exchange 106 and in PNB’s 20-odd acre project opposite the former Pudu Prison, there is Merdeka 118.

Both Exchange 106 and Merdeka 118 will be joining the ranks of the Petronas Twin Towers, offices at The Gardens in Mid-Valley and Integra in The Intermark as being prime office space.

Kuala Lumpur is home to some of the most prime and innovative buildings in the region.

They are no longer down-to-earth Grade A office buildings, but are known as super prime, or taking a leaf from the world of investment Triple-A buildings, an industry source said.

However, while these are top grade buildings, the rental needs a big boost.

Its triple volume walls have book-matched design while the lift lobbies are sequentially matched.

Merdeka 118 boasts of equally breathtaking architecture in a region reliant on peaceful cohesive trade ties between China and the United States and other continents.

The race to the top, however, has not been matched by down-to-earth issues such as rent which remains a sensitive issue with their building owners.

About 20% of Exchange 106’s 2.6 million sq ft has been tenanted by the service sector of international stature, a milestone for the owners in a challenged office market. As new potential tenants come in, rental rate is slowly inching up, an industry source said.

Indonesia’s Mulia Group last week said Exchange 106 has won the Award Excellence 2020 for “Best Tall Building 400 metres and above” by the Council on Tall Buildings and Urban Habitat (CTBUH). 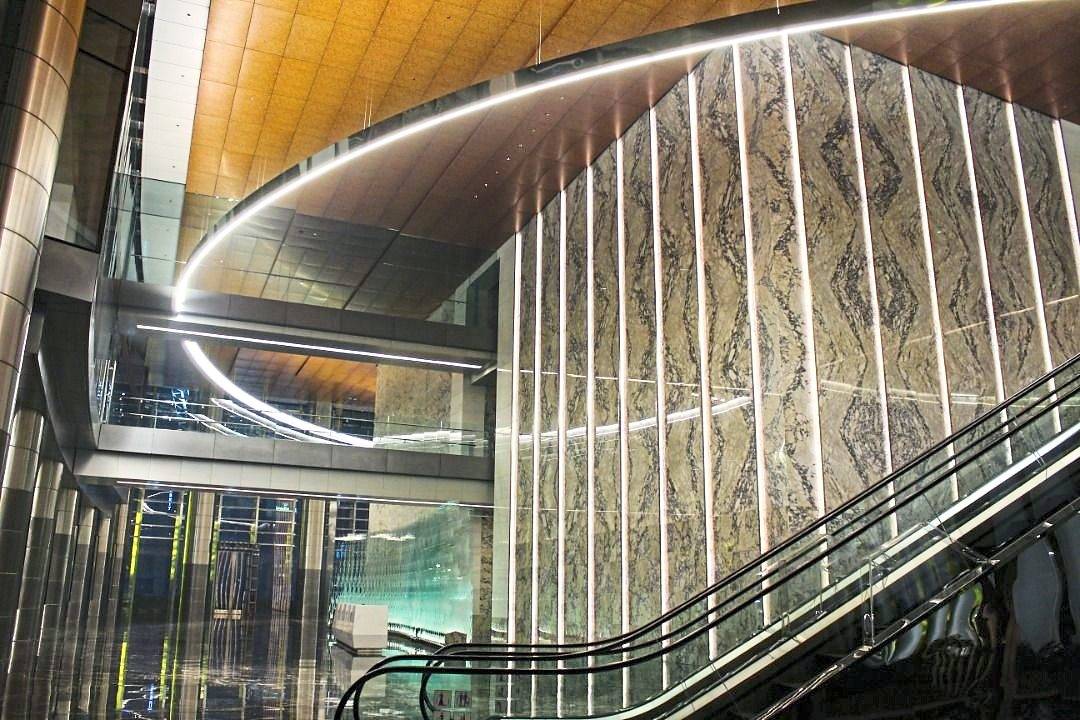 Triple volume public area with book-matched design on the walls of Exchange 106.

That is indeed a feather in their cap for the group.

CTBUH is a non-profit organisation in the field of tall buildings and sustainable design.

Every year, it gives recognition to some of the world’s best tall buildings and highlights their winning aspects.

The recognition by the international body is a huge endorsement for Mulia and the Finance Ministry (MoF), which owns 51% of it.

According to a Mulia release, this is the first time the Award of Excellence has been bestowed on a Malaysian building.

Exchange 106 was designed by Mulia Group Architects, led by Ali Moghaddasi, himself an icon in the world of building design and architecture.

Said Moghaddasi: “Throughout the process of designing the building, we looked at all the requirements from the authorities and special qualifications including acquiring the MSC status, Green Building Index (GBI) certification as well as the Leadership in Energy and Environmental Design (LEED) recognition. Naturally, we also went further, whether it was to provide a higher grade marble flooring, high performance insulated glass, turnstile access control or a camera-based car park guidance system, we looked for that extra touch, and implemented it within the building.”

The revival of Bandar Malaysia last week, Exchange 106’s victory on the world’s stage and PNB’s reference to Merdeka 118 have once again turned the focus on the office space supply in the Klang Valley. Raising his concern, former finance minister Tun Daim Zainuddin said: “My worry is the huge property overhang and they’ll have to handle it. If there are buyers (for Bandar Malaysia) okay, then good.”

When asked if Bandar Malaysia’s revival would contribute to the worsening of the property overhang issue, he said: “Unless you can get buyers, you don’t develop, isn’t it?”

The core, or the backbone of a building, refers to the area where the lift area is located.

All the floors are built up from the core. Zeti said that by Dec 31 this year, it would reach the 80th floor.

“Recently, it has gained momentum, ” she said.

“The decision was made at the beginning that if we went ahead with this, the strategy (of Merdeka 118) would be different.

“There would be two aspects – distinguished and differentiated. So, we will look for new tenants who will be differentiated from the rest.

“We also offer something highly differentiated. It is also a premium A building.

“There are very few premium A buildings and most of the premium buildings in Malaysia have very high occupancies.

“There only four or five of such buildings here. So, we are not competing with the other buildings, ” Zeti said.

With real estate facing a myriad of challenges, Zeti was asked if it had difficulties disposing of Plaza Damansara and its properties there, which was sold at a discount.

“We looked at the opportunity to optimise our investments and part of that is a strategy to recycle our capital to areas of higher returns.

“In other words, as we sell off, we are able to reinvest in opportunities that generate a higher return.

“Therefore, we were given this opportunity and it was sold as a block.”

PNB president and group CEO Jalil Rasheed said the fund had intended to sell it as a block and that there was low occupancy for the units, which was running at about 60%.

“There was also the stratified nature of the multiple management corporations that were running the shoplots which made it difficult for us to get a complete uplift that we wanted.

“When we looked at our real estate portfolio, we decided that that is not the area that we want to be involved in anymore – owning shoplots and managing multiple tenants.

“Our real estate strategy is now very focused on what kind of buildings and in which geographical area that we want to own. Shoplots do not fit that, ” he said.

An analyst who declined to be named said the government’s stake in real estate can be disquieting as the sector is expected to be slow, going forward.

As Zeti rightly pointed out: “One of the strategies that we decided not to be is a developer.”