SINGAPORE: Singapore may increase its supply of public housing next year as the city-state introduced measures Tuesday aimed at making such homes more affordable.

The Housing & Development Board, which is the body responsible for public housing, would probably have to increase supply in 2020 to meet the additional demand expected to stem from the changes, according to a joint statement from MND and HDB.

In Singapore, most people live in so-called HDB flats as opposed to private apartments.

There’s a robust pipeline of the latter, with the government in June announcing it would reduce the supply of private housing in the second half.

The new measures, which don’t apply to the private market, will come into effect Sept. 11.

Eligible first-timer families will get an EHG of up to S$80,000 ($58,000) when they buy an apartment that can cover them and their spouses to the age of 95, subject to conditions

Eligible first-timer singles aged 35 and above and earning not more than S$4,500 a month can also get an EHG of up to S$40,000, subject to conditions

The monthly household income ceiling will be increased to S$14,000 from S$12,000 for eligible families to buy an HDB flat or a resale flat on the open market

"The HDB resale market could become even more active with the enhanced grants, ” said Nicholas Mak, the Singapore-based head of research at APAC Realty Ltd. unit ERA. He added that some HDB flat owners who sell their apartments to upgrade to a private condo could also have a positive impact on that market.

Wong said to support the additional demand, the government plans to increase its build-to-order flat supply.

"We’re on track for about 15,000 units this year, ” he said during a speech at an industry awards night Tuesday. "Next year, we are likely to have to release more units, which should be good news for the industry -- because we are putting out more supply, there will be more business for everyone, be it an architect, builder or engineer.”

Wong also said there would be more upgrading projects in the coming year.

BTO flats are HDB flats where construction will begin only if 65% to 70% of the apartments in the flat have been booked. The construction is aborted if this requirement isn’t met. BTOs typically have a wait time of three to four years from the date construction begins.

HDB was set up almost six decades ago in 1960, and has built more than 1 million flats across 26 towns and estates around Singapore. - Bloomberg 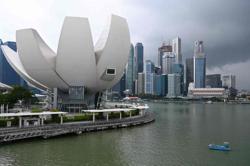