Rising oversupply of commercial properties yet to be resolved

WHILE the recently-tabled budget has tackled various challenges facing the residential property sector, it was silent on measures dealing with the rising oversupply and overhang situation in the commercial sub-segment.

According to Jones Lang Wootton’s in-house research, a total of 13.332 million sq ft of office space, in the form of 33 office buildings, is scheduled to be completed in the Klang Valley over the next 30 months, and almost half of this, 6.586 million sq ft is scheduled for completion in the second half of 2018.

David Jarnell, senior vice-president and head of research says, there is already a growing trend of developers deferring completion dates and based on the historical trends set in oversupplied markets, it is anticipated that 50% to 60% of this space, could be deferred to 2019 or beyond. In a recent report, Savills Malaysia executive chairman Datuk Christopher Boyd told StarBiz that some 6.2 million sq ft of office space is expected to be completed in the Klang Valley this year.

He says the estimated net absorption rate this year is 1.9 million sq ft. According to the Valuation and Property Services Department’s Property Market Report 2017, the shops sub-sector last year recorded an overhang value increase of 16.3% to RM3.3bil, as more than 62% of these overhang units were in the RM750,000 and above category.

The unsold under construction and not constructed reduced further by 14.5% and 53.6% to 5,889 units and 332 units respectively.

In spite of the overhang situation, an analyst says occupancy rates for the purpose-built office sector have remained healthy.

“The occupancy rates of office buildings within the Klang Valley usually tend to be just over 80%. It goes up when a new generation enters the workforce – and dips when new supply comes in.

He adds that there is also rising demand for good (grade A) office buildings from multinational companies.

“An example is the Tun Razak Exchange (TRX), which has been successfully wooing investors.”

He also says more companies have no problems setting up their base of operations away from the city.

“The trend before was to be strategically located in the heart of the city or as close to it as possible. But not anymore. Today, a lot of companies are comfortable with working far from the city,” he says, citing locations such as Mid Valley and Bangsar South as examples.

“The property market is also cyclical. There’s more supply coming in but, it will be taken up eventually,” he says.

Savills Malaysia, in its Kuala Lumpur office Asian cities report for the second half of 2018, points out that flexible workspace culture is also a growing, global phenomenon.

“Flexible workspace is a ready-to-use office space that offers shorter leases, and personalised services. This concept made its way to Malaysia more than two decades ago.

“However, the total amount of flexible workspace accounts for less than 1% of the total office space in Greater KL. Most operators prefer to set up through shops and/or industrial areas in decentralised locations for cost effectiveness.”

Savills says the high impending supply of office space is likely to cause a subdued-to-negative effect on office rents, adding that office vacancy rates are expected to rise.

The property consultancy says this can be seen through notable tenant movements such as Hong Leong Bank headquarters relocating to Menara Hong Leong at Damansara City, Jardine Lloyd Thompson relocating to Q Sentral and recently, Accenture relocating to The Vertical Corporate Tower 2 at Bangsar South.

“Overall, the grade A office market remains competitive as supply continues to grow amid the completion of better-specified buildings.”

According to Savills, Greater KL continues to see supply growth, although in the first half of 2018, all 1.86 million sq ft of this space was located in suburban areas.

“In keeping with longer term trends, about 15% to 20% of the new supply came in the form of stratified offerings, which generally do not compete well with the remaining en bloc space available in the market.

“Of the total new office supply, 1.5 million sq ft is located in single-owner, en-bloc office buildings, the most prominent of which is possibly the Menara Celcom. This building has been purpose-built for the tenant, who will be taking up a 15-year lease.”

Savills adds that pre-lettings in the other new completions have not been as strong, due to a combination of market conditions and building attributes.

“In Greater KL, it is not uncommon for buildings to complete with less than 30% of space pre-let,” it says.

Nevertheless, Savills says construction of new buildings continues unabated, with about 20 million sq ft coming on stream between now and 2022.

“Of the future supply, 58% will be located in KL city, followed by outer KL (22%) and KL suburbs (20%). With the exception of TRX’s Signature Tower, the remaining city-centre space is mostly completing from the second half of 2020.”

Noteworthy is that TRX – the new financial and business district in KL, has received interest from both foreign and domestic investors and continues to do well.

“With most of the parcels in the first phase (50 acres) taken up, there are eight parcels left, out of which four are owned by the Finance Ministry.

“The Exchange 106, a 492m signature tower built by Indonesia’s Mulia Group, will be completed by the end of 2018, while Menara Prudential by IJM Corp Bhd

is scheduled for completion in the first quarter of 2019, adding 2.7 million sq ft in total to KL’s Golden Triangle office market,” says Savills.

It points out that this will be the next phase of the city’s growth – a substantial transition that will change the city’s skyline.

“While space in Menara Prudential is being taken up, the market is keeping a keen eye on the pre-leasing activity at The Exchange 106. Other office towers in the TRX include HSBC’s headquarters, Affin Bank’s headquarters and a corporate office tower within the TRX Lifestyle Quarter, all of which are scheduled for completion within the next three years.” 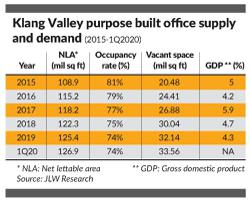