At the finish yesterday, the local stock market benchmark, the FBM KLCI, was at a historic high of 1,895.18 points, shooting past its previous all-time high of 1,892.62 points recorded in July 2014.

Gains were generally broad-based with banks and commodity-related counters leading the way.

Notably, foreigners were net buyers yesterday, buying some RM929mil worth of local shares.

But fund managers warned that external trade tensions and geopolitical risks could make a comeback and ruffle markets again, at any point – barely weeks after global markets were roiled by these same issues.

Vincent Wen, an investment manager at KCG Securities Asia, told MarketWatch that fears about trade tensions, specifically between the United States and China, and other geopolitical risks could re-emerge at any time.

“The stock markets are in an ongoing tussle between the bulls and the bears, and investors shouldn’t be too positive on the outlook,” he was quoted as saying by the financial information website.

Danny Wong, CEO of fund-management firm Areca Capital, also believes that external risks including geopolitical tensions between the US and Russia, remain. “Any small bit of negative news can send shares down again,” he said.

In Malaysia, there is the added element of market volatility ahead of the looming general election, which is keeping some investors on the sidelines.

Meanwhile, crude oil price has started to be associated with the magical US$100-per-barrel figure again, when not too long ago this number was hardly imaginable due largely to oversupply issues.

At last look, the benchmark Brent crude oil was trading at US$74.33 per barrel, a level not seen in more than three years.

The crucial psychological level of crude oil was US$72 per barrel which was breached last week. Now, technical indicators point toward the mid-US$80-per-barrel levels.

The price of the black gold is being held up by falling inventories and expectations that production cuts by the Organisation of the Petroleum Exporting Countries (Opec) will likely be maintained.

Opec and 10 other oil producers had pledged to curtail output by a total of 1.8 million barrels per day since January last year, and to continue doing so until the end of 2018.

Saudi Arabia, the leader of the pack, has sent out signals that it will be comfortable with oil price increasing to US$100 a barrel, indicating that no changes are expected to be made to this agreement.

The next Opec meeting to review the cuts is expected to be on June 22 and the members are likely to agree to continue with the production cut until mid next year.

At the finish yesterday, most Asia-Pacific markets were up, while the US and the UK stock futures were mostly higher at press time, with the exception of the Dow Jones.

In the US, first-quarter earnings have been dominating investors’ attention this week, with results so far being more encouraging than not, on the whole.

The jury is still out on how the earnings season in the world’s largest economy will pan out as fresh corporate results continue to stream in over the coming weeks. 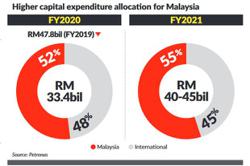