PREDICTIONS are never easy, and today’s current property market is more difficult to fathom with several national and global wild cards on the table.

This confluence of factors are expected to impact the property market this year. On the national front, there is the weak ringgit/weak oil price, the April 1 implementation of the Goods & Services Tax (GST) and the unravelling 1MDB issue.

The survey was concluded in the second week of January, before the ECB’s 1.1 trillion-euro (US$1.2 trillion) or 60 billion euro-a-month bond-buying programme which started earlier this week and before the fast-unravelling 1MDB issue.

In his opening address, Knight Frank Malaysia’s managing director Sarkunan Subramaniam predicted that “at least for the first 10 months of this year, the commercial investment market will see a softer subdued climate.”

“The healthcare/institutional and hotel/leisure sectors are likely to be more resilient while the office sector seems likely to see some strain. The retail sector will have a slightly poorer year but certainly better than offices,” says Sarkunan.

The logistics/industrial sector may actually turn up to be “a good surprise” for investors, he says.

“But do remember while sentiments do drive the market, hard facts determine said sentiments,” he says. The commercial sector is affected by the GST, while the residential sector to a much lesser degree, says Sarkunan.

Given time to adjust, there may be more clarity by October/November, he says.

About half (48%) of the Knight Frank survey which concluded in January comprised developers, a third of them fund/Reit managers and a fifth of them (19%) commercial lenders. 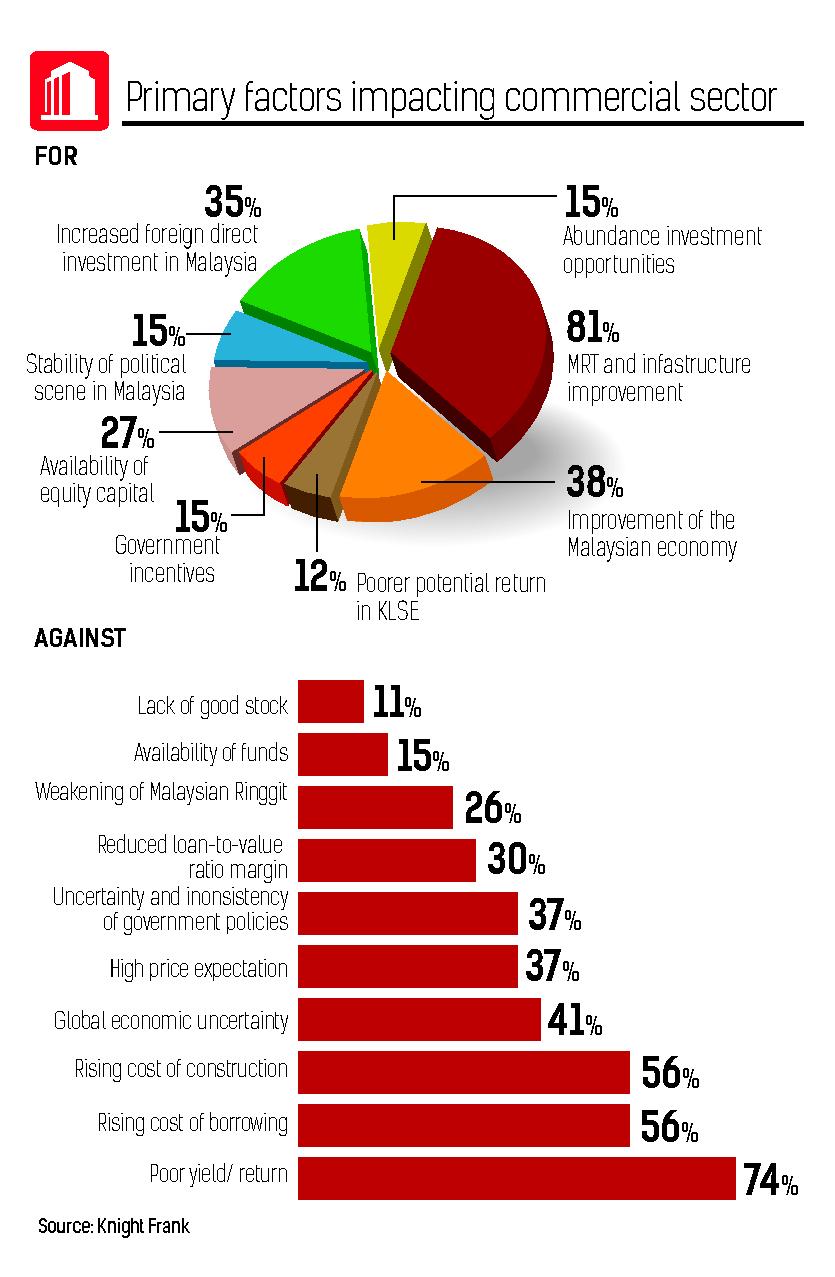 But all is not doom and gloom. The mass rapid transit (MRT) and infrastructure improvement is seen as the salvation of the Klang Valley.

“The yield is greatly affected by overambitious pricing on office and retail sectors. The commercial real state market may still present great opportunity for investment if prices adjust accordingly to the rising cost of construction and borrowing.

“However, vendors tend to be a little too assertive on their prices, making yields unattractive,” says BlackRock Property Malaysia Sdn Bhd director Patrick Liau in the Knight Frank survey.

While the office sector may be a strain in the Klang Valley, Sarkunan says the office possibility in Iskandar is tremendous, especially for shared services (backroom services).

He says Medini is looking at launching office projects but there is a difference between building offices for sale and building them to let with a specific purpose in mind.

When volume goes down and value goes up, it indicates that the market is heading towards a problematic phase, says Major.

Extrapolating that further, Major says the condominium sub-segment priced between RM500,000 and RM1mil saw an increase of 33% in transacted volume for the first half of 2014 compared with the same period a year ago amid an overall falling residential market. As at the third quarter of 2014, condominiums account for more than half (53%) of total Kuala Lumpur residential transactions.

On a ringgit value basis, as at the third quarter, condominiums account for 47% of total value of Kuala Lumpur residential transactions with total value of residential sales increasing 13.8% for the first nine months of 2014 compared with a year ago.

Prices are still on the rise, says Major.

Both Major and Sarkunan concur that the residential market – not as much impacted by the GST as the commercial sub-segment – are attracting a lot of attention.

Rightly or wrongly, Major juxtaposed the interest in condominiums in places like KLCC against the landed situation in Damansara Heights.

“Damansara Heights is an owner occupier market and the general (price trend) is up. But in the KLCC market, 70% to 80% of the market are investors,” says Major.

As for the Mont’Kiara market, Major says while that location is popular among the Gen Y (aged between 21 and 34) who aspire to live there, it remains unaffordable for them.

“Inflation presses down debt value and in time to come, property prices will improve. So in some ways, inflation works in the favour for them if one were to consider the 15 to 20-year scenario,” he says.