The research house said PPB’s second 1,000 tonnes per day flour mill that was commissioned in Indonesia in November and an additional 150 tonnes per day mill in Vietnam, should bring higher volumes to its flour and feed milling and grains trading divisions.

Hwang-DBS initially assumed PPB’s margins would expand to 7.3% in the financial year ending Dec 31, 2014 from 6.6% in 2013 on the back of stable wheat prices, and better efficiency and scale at its Indonesian operations. However, it said the company could face some downside risks should the Ukraine issue persists, as it was the sixth largest wheat exporter in the world, adding that the continuous unrest in Ukraine had pushed wheat prices up to its highest in 18 months. 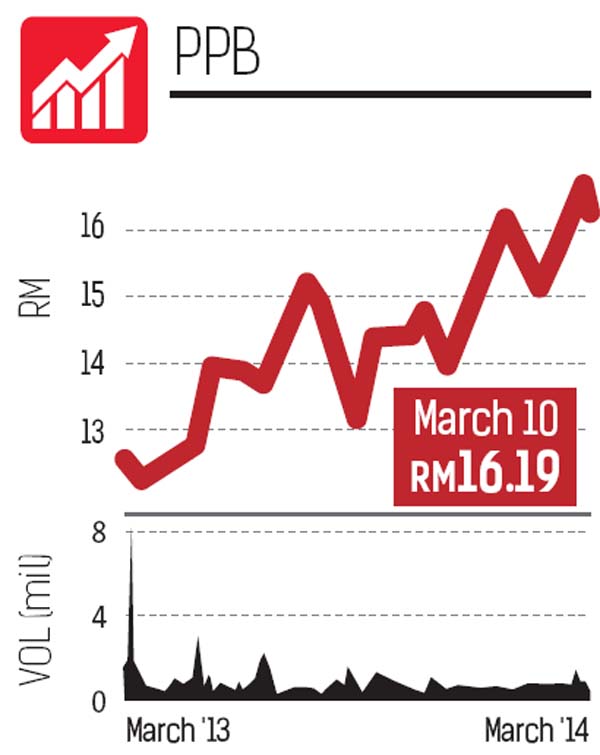 Hwang-DBS Vickers said the cinema division had been performing consistently, with the delivery of 15% growth in earnings before interest and tax to RM50mil in 2013, adding that PPB planned to open six more cinemas (60 screens) in 2014, bringing the total screens to 293.

It said GSC had about 29% in market share by screens and 40% by revenue and that there was room to grow for at least three to five more years. PPB was budgeting RM440mil for capital expenditure over the next one to two years, which would be used mostly for flour and feed milling, and cinema. The research house said PPB’s valuation was fair at 17.5 to 18 times 2014 to 2015 price-earnings, on the back of modest growth.

AMRESEARCH has reaffirmed its “buy” recommendation for Bonia Corp Bhd, with an unchanged target price of RM4.50 per share, pegged to a 10 times price-earnings over Bonia’s calendar year 2015 forecast earnings.

It believed Bonia’s growth in the next few years would be driven by rising sales volume, on the back of strong brand recognition, compelling product range and increasing regional footprint.

It said although Bonia would be selective in new boutique openings, it would continue to strengthen its brand recognition and expand aggressively into Indonesia.

AmResearch also said Bonia was also well-positioned to capitalise on the economic recovery in Vietnam with an extensive distribution network of 17 boutiques and 28 counters. It said expansion of Braun Buffel would be through company-owned boutiques, exports of licensing. It said Bonia currently exported Braun Buffel products to Indonesia and has given out a licence in China, where the licensee owned more than 100 outlets. AmResearch said Bonia’s in-house brands and Braun Buffel could enter new markets, particularly in Asia by potential tie-ups with established partners.

It said Bonia traded at an undemanding valuation of only nine times 2015 price-earnings, taking into account its significant earnings expansion and a robust three-year compounded annual growth rate of 35%.

FOLLOWING Berjaya Food Bhd’s weaker-than-expected third quarter results, AmResearch has maintained its “buy” recommendation on the stock, with a lower target price of RM2 per share.

Net profit for the company rose 26% year-on-year for the nine-month period ended Jan 31, 2014, driven by increased sales. No dividends were declared during the quarter.

AmResearch said the nine-month results represented 67% of its full-year projections of RM26mil, below its expectations.

AmResearch trimmed the earnings per share forecast by 13% to reflect flat SSSG for KRR Malaysia and Jollibean Singapore. It forecast 2014 earnings to grow by 22% to RM23mil. It said Starbuck’s exponential expansion and robust consumption demand was expected to remain strong and that prospects of its foray into Brunei in February look promising. The research house expected minimal contribution in 2014.