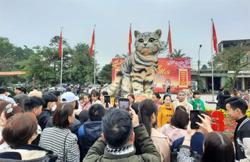 Saksayam visited the airport on Thursday in response to complaints that passenger services were suffering long delays at peak times as flight schedules return to normal after Covid-19.

Hw reported that congestion at passport control for arriving passengers had eased significantly and it was now taking an average of 15 minutes for each passenger to pass through passport control.

But passengers were still waiting up to 1.5 hours for their luggage to arrive on the carousel when the target was 15 minutes, he added.

THAI and BFS Ground representatives told Saksayam the delays were due to staff cuts amid rising operational costs. The cuts mean that a large passenger plane is now unloaded by only one ground service team instead of three teams as in the past.

Saksayam ordered the airline and baggage handler to come up with a plan to fix the problem within one month, or the ministry would find a new baggage handling firm.

The aim is to reduce the taxi waiting time to 10 minutes per passenger.

Suvarnabhumi Airport is expected to welcome 130,000 passengers per day in December as the tourism season peaks. — The Nation/ANN