Members of the Philippine, Japan, South Korea, and US Marine carry national flags during the opening ceremony of the joint military exercises Kamandag or the “Cooperation of the Warriors of the Sea,” at the headquarters of Philippine Marine Corps, in Taguig City, Metro Manila, Philippines, Monday, October 3, 2022. - Reuters

MANILA, Philippines (AP): More than 2,500 US and Philippine marines joined combat exercises Monday to be able to respond to any sudden crisis in a region long on tenterhooks over South China Sea territorial disputes and increasing tensions over Taiwan.

The annual military drills are some of the largest so far between the longtime treaty allies under newly elected Philippine President Ferdinand Marcos Jr. His predecessor, Rodrigo Duterte, was an outspoken critic of US security policies and frowned on military exercises with American forces he said could offend China.

Called Kamandag, the Tagalog acronym for "Cooperation of the Warriors of the Sea,” the drills involve 1,900 US Marines and more than 600 mostly Philippine counterparts in mock amphibious assaults and special operations, US and Philippine military officials said. America’s HIMARS missile launchers and supersonic fighter jets will take part in live-fire maneuvers that will end on Oct. 14, they said.

The venues include the western island province of Palawan, which faces the South China Sea, and the northern Philippines, across the Luzon Strait from Taiwan.

Philippine Rear Admiral Caesar Bernard Valencia said the exercises will focus on enhancing coastal defenses and are not directed against any country.

Japanese and South Korean forces will participate as observers but may join in disaster-response drills, he said.

The military maneuvers are being held simultaneously with combat exercises between U.S. Marines and Japanese army forces on Japan’s northern island of Hokkaido that involve about 3,000 military personnel from the two sides, US military officials said.

US Major-Gen. Jay Bargeron of the Japan-based 3rd Marine Division said the simultaneous exercises are aimed at bolstering the defensive capabilities of the U.S. alliances with the Philippines and Japan "through realistic combined training.”

"These exercises will allow our forces to strengthen interoperability and readiness to ensure we are prepared to rapidly respond to crisis throughout the Indo-Pacific,” Bargeron said in a statement.

"Our strength, resolve and commitment to our allies and partners in the region are our most effective deterrent,” US Marine Lt. Col. Kurt Stahl told The Associated Press. "Together, we can deter potential adversaries from ever testing our capabilities or our relationships.”

In July, US Secretary of State Antony Blinken called on China to comply with a 2016 arbitration ruling that invalidated Beijing’s vast territorial claims in the South China Sea and warned that Washington is obligated to defend the Philippines under a 1951 US-Philippines Mutual Defense Treaty if Filipino forces, vessels or aircraft come under attack in the disputed waters.

The ruling was issued by an arbitration tribunal set up in The Hague under the U.N. Convention on the Law of the Sea after the Philippine government complained in 2013 about China’s seizure of a shoal off its northwestern coast. China did not participate, called the arbitration decision a sham and continues to defy it.

In addition to China and the Philippines, Vietnam, Malaysia, Taiwan and Brunei have overlapping claims in the busy waterway, where an estimated $5 trillion in goods passes each year and which is believed to be rich in undersea gas and oil deposits.

The long-simmering sea disputes and the increasingly tense relations between China and Taiwan have become key fronts of the US-China rivalry. - AP 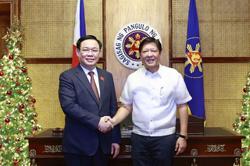 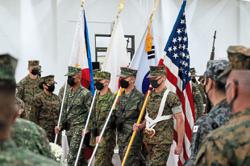