PLAGUED by mosquitoes at night and marauding monkeys by day, ship captain Glenn Madoginog (pic) was held for months at an Indonesian naval base before ending up in a cramped prison cell, sleeping alongside convicted murderers and child rapists.

The Filipino father of four was one of dozens of captains held at the Batam naval base after being arrested for anchoring in Indonesian waters without a permit while waiting to enter Singapore, according to a dozen people involved in the cases, including captains, ship owners and insurers.

Most of the captains were freed after a few weeks once ship owners made unofficial payments to navy intermediaries of between US$300,000 and US$400,000 (RM1.4mil and RM1.5mil), the people said.

But Madoginog, 47, says his firm declined so he and his vessel, the 20-year-old Seaways Rubymar oil tanker, remained captive in Batam, an Indonesian island 32km south of Singapore.

After a six-month wait, Madoginog was sentenced in March to 60 days in jail, his once-proud life as a captain shattered as he ended up in a crowded cell.

“The last few months were the worst time of my life,” Madoginog said in Manila, where he returned in May.

US company International Seaways, one of the world’s biggest tanker operators and owner of the Seaways Rubymar when it was detained, said it had pursued all legal avenues to get Madoginog and the vessel released.

“As a matter of policy, we do not pay bribes,” it said in an emailed response to Reuters, adding that it did all it could to improve Madoginog’s conditions while in custody and continued to provide financial and medical support to him and his family. The Seaways Rubymar has since been scrapped.

Dozens of ships waiting to enter Singapore have been seized over the last year by the Indonesian navy for illegally anchoring in its waters, with most being released after ship owners made unofficial payments, Reuters has reported.

The four captains said they believed they had been held for ransom in a well-organised extortion scheme run by navy members, as previously reported by Reuters.

David Ledoux, an American who was captain of the fibre-optic cable-laying ship Reliance when it was arrested last year, said he dodged prison after the vessel’s owner made an unofficial payment.

“This is piracy in its simplest form: arrest the ship, arrest the captain, hold the company ransom, collect the money,” Ledoux said in his home in New Bern, North Carolina, also accusing navy members of orchestrating the scheme. — Reuters 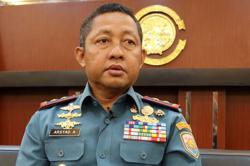