A worker sifts wheat before filling in sacks at the market yard of the Agriculture Product Marketing Committee (APMC) on the outskirts of Ahmedabad, India, May 16, 2022. - Reuters

SINGAPORE, Sept 26 (The Straits Times/ANN): At least one well known Indian eatery may stop selling its popular chapati dish this week, while another is expected to raise prices due to India's ban on wheat exports.

Popular Indian eateries here tell The Straits Times that the ban since May has forced them to turn to wheat flour from other countries which now costs about three times more than that from India before. The prices of flour from India have similarly increased.

The three eateries ST spoke to said they are bearing the increase in costs for now, but customers may soon have to pay more for their food.

India, the world's second-biggest producer of wheat, stopped exporting the grain and its flour in May in an attempt to put a cap on skyrocketing domestic prices after a heatwave parched crops and affected wheat supply.

The ban came amid Ukraine's wheat exports being curtailed by the ongoing Russia-Ukraine war. Ukraine used to be the fourth-biggest supplier of wheat to the world, accounting for about 9 per cent of the global wheat trade.

Sakunthala's Restaurant, which has five outlets in Singapore, is well known for its Indian cuisine and, most notably, its chapati.

The restaurant is currently still using flour from India that it has stocked up before the ban, but the stock is expected to run out by this week.

Mathavan added that the restaurant is concerned that using other sources of wheat flour would affect the texture of its chapati.

Getting flour from alternative sources, such as Dubai, would also mean paying triple the price for the ingredient, he said.

The restaurant used to pay S$5 a kg for wheat flour from India, but the flour from Dubai now costs S$15 a kg.

"The flour shortage will affect our business very badly. We cannot pass all the cost to our customers, we have to try and keep prices low," added Mathavan.

Wheat flour from India, albeit making up only a small proportion of total imports, is sought after by Indian eateries here as it produces soft and chewy chapati, an Indian staple.

Owner of Punjabi and Bengal eatery Mustard Singapore, Radhika Abbi, 51, said many Indian eateries here will have to struggle with higher costs once their existing flour stocks from India run out.

She said she used to pay S$2 a kg for wheat flour, but is now looking at paying close to $8.

Like Mr Mathavan, she said the quality and texture of the Race Course Road eatery's chapati would be affected when it is forced to switch to another source of wheat flour.

Its director, S. Mahenthiran, has currently suspended menu items like chapati, poori bhaji and tandoori, all of which require wheat flour to make.

He is currently waiting for stock on his regular brand of wheat flour to arrive, as he is hesitant to switch brands as the quality of the dough would be affected.

"It will be a drastic change, especially for people like Punjabi workers who eat up to six chapatis per meal every day," he said.

Punjabi workers make up the bulk of Mr Mahenthiran's customers.

Stores here which import wheat flour primarily from India are sourcing for alternatives.

Megastore Mustafa Centre in Serangoon Road is looking to import wheat flour from the Middle East and Britain.

Its purchasing director, Mohd Saleem, said Mustafa shoppers can expect to pay more for flour due to the increase in freight costs. He did not specify how big an increase consumers can expect.

ST has sent queries to supermarket chain FairPrice which has yet to respond. - The Straits Times/ANN 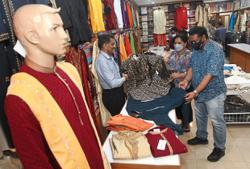