A RED Lions parachutist who was stretchered off after a rough landing during the National Day Parade (NDP) at the Marina Bay floating platform on Tuesday is in stable condition.

In a Facebook post, Defence Minister Ng Eng Hen said: “Many Singaporeans would have seen one of the Red Lions take a hard landing at NDP.

“3WO (Third Warrant Officer) Jeffrey Heng’s condition is currently stable, alert and conscious, and he is receiving medical attention. Let’s all wish Jeffrey a quick recovery.”

NDP host Joakim Gomez gave a similar update to the live audience at the floating platform, who received the news with cheers.

Heng was the last of 10 parachutists to land.

The incident, which took place at about 6pm, drew concern from both spectators at the floating platform and people watching the parade at home. Videos and photos of the incident were quickly shared on social media, showing army soldiers attending to Heng.

This is the first full-scale NDP in three years since the coronavirus pandemic hit in 2020, with about 25,000 people watching the parade.

During the second NDP preview on July 30, several Red Lions appeared to struggle with strong winds, with at least two landing face forward on their hands.

In July last year, a parachutist took a hard fall and had to be stretchered off during an afternoon jump in Bishan. The Red Lions parachutist had a flag attached to him that got caught in the grass as he was about to land.

In 2005, another Red Lions parachutist suffered a fracture to his pelvis when he had a hard landing at the Padang during a National Day Parade rehearsal. — The Straits Times/ANN 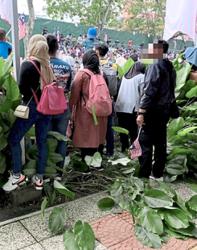