"A more modern aerial and surveillance capability is all the more felt given the territorial disputes that we in the Philippines are involved in,” Marcos said in a speech on Friday evening (July 1) at an Air Force event, among the first he attended as president. It would also help the fight against insurgents and extremists, he said.

Tensions between the Philippines and China have risen in the recent weeks, with Manila filing protests against Beijing’s presence in contested parts in the South China Sea.

Marcos, son of the nation’s ousted dictator, said he will also focus on food sufficiency and pandemic recovery in an inaugural speech that paid tribute to his late father.

"The role of agriculture cries for urgent attention,” Marcos said in Manila on Thursday after taking his oath of office. "An agriculture damaged and diminished by unfair competition will have a harder time, or will have no prospects at all of recovery.”

The new leader, who’s appointed himself agriculture chief, said he would rebuild the nation’s economy to regain its position as a growth leader in the region.

He pledged to fix shortcomings in pandemic response, and come up with plans to transform the economy and boost infrastructure.

The former senator returns to the presidential palace where he spent his youth before his family fled in 1986, driven out by a popular uprising. His father’s two-decade rule was marred by thousands of killings by the military regime and by the clan’s accumulation of billions of dollars in ill-gotten wealth.

Marcos Jr. won the presidency by a landslide with a campaign that promised unity and measures to spur the economy after the pandemic, even as opponents accused him of misportraying the dictatorship as a golden era for the Philippines.

Marcos said he will draw inspiration from the leadership of his father.

"I once knew a man who saw what little had been achieved since independence,” Marcos said. "But he got it done, sometimes with the needed support, sometimes without. So will it be with his son.” - Bloomberg 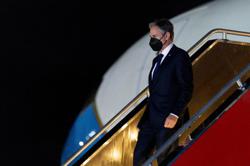