SHANGHAI (Bloomberg): China’s Covid-19 outbreak is shifting to its south coast, with a flareup in technology hub Shenzhen triggering mass testing and a lockdown of some neighbourhoods, while gambling enclave Macau -- an hour’s drive away -- is racing to stop its first outbreak in eight months.

The new cases come as China’s two most important cities, Beijing and Shanghai, look to be subduing the virus after months of strict curbs and repeated testing.

Yet new clusters continue to emerge, prompting heavy-handed action from local officials fearful of spiralling outbreaks. Its borders are increasingly under pressure, with Dandong - just across the river from North Korea - reporting six local cases. In the city of Jilin to the north east, there were 10 new infections among cold-chain workers.

In Shenzhen, home to companies like iPhone maker Hon Hai Precision Industry Co., isolation orders were imposed for several residential compounds in the Futian and Luohu districts that border Hong Kong after each reported an asymptomatic infection. The city recorded two local cases on Tuesday.

Gaming hub Macau shut schools and non-essential businesses after the government found 36 infections as of Monday afternoon, though casinos remain open. Fearful of contagion, neighbouring Zhuhai on the mainland locked down the area of the border crossing.

The shifting focus of China’s Covid concerns underscores the Sisyphean task of stamping out a pathogen so infectious that the rest of the world has adjusted to living with it. After damaging outbreaks marred the spring, especially in Shanghai, China is facing pressure to boost economic activity ahead of a party congress later this year where President Xi Jinping is expected to clinch an unprecedented third term as leader. 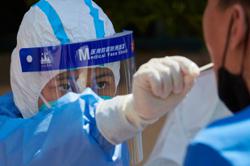