By A Special Report From The Straits Times

On Monday (May 23), Malaysian Prime Minister Ismail Sabri Yaakob announced that his country will halt the export of up to 3.6 million chickens a month until domestic prices and production stabilise. - AP

SINGAPORE/JOHOR BARU, May 28 (The Straits Times/ANN): Chicken suppliers in Malaysia are working overtime and rushing to send as many chickens as they can across the Causeway before the export ban kicks in on June 1.

Eight exporters, farmers and suppliers in Malaysia who spoke to The Straits Times on condition of anonymity said the sudden announcement by the Malaysian government to ban the export of chickens came as a shock.

They added that they have since been rushing to send as much of their supply as possible to Singapore, with some farms working round the clock to make arrangements for additional lorries and deliveries.

The rush comes amid a surge in demand for fresh chickens in Singapore, with supermarket shelves wiped clean.

The Singapore Food Agency (SFA) told ST it is working closely with the industry to manage the chicken supply situation in Singapore. “The industry has activated its supply chains to increase the import of chickens,” it said.

The Animal Veterinary Service has extended operating hours for inspection of incoming live poultry at Tuas Checkpoint from May 25 to May 31, the agency added.

On Monday (May 23), Malaysian Prime Minister Ismail Sabri Yaakob announced that his country will halt the export of up to 3.6 million chickens a month until domestic prices and production stabilise.

Malaysia is currently facing a shortage of chicken.

The Malaysian authorities are investigating the possibility that cartels are controlling the price and supply of poultry, with a report due in June, reports said.

But those in the industry who spoke to ST said a lack of manpower, rising costs, disease and bad weather are behind the shortage.

An exporter told ST that while the bigger players may try to increase their prices from time to time, they are forced to bring prices back down because consumers will simply switch to other sellers offering cheaper options.

"Even if several farms decide to raise prices together, there are many others who will keep selling at the lower prices, and then everyone will buy the cheaper ones instead," he said.

"After maybe a week, those who increase their prices soon realise they are losing business and quickly bring their prices back down."

He added that because chickens are a fast-moving commodity with numerous players in the market, any attempt to manipulate the market would ultimately fail.

The exporter said this was due to added costs from rising petrol and feed prices, and that it was not a mark-up meant for further profit.

Last year, Singapore imported about 34 per cent, or close to 73,000 tonnes, of its chicken supply from Malaysia, according to the SFA.

The other major sources of the poultry last year were Brazil (48 per cent) and the United States (8 per cent), but these were frozen meat.

More than 3.7 million chickens were slaughtered in Singapore in March this year, according to data from SFA.

Singapore's live chickens can be imported from only 115 farms in West Malaysia approved by the SFA. Of these, 91 are located in Johor.

ST visited one such farm in Johor on Friday.

Like many chicken farms in Malaysia, it was located several kilometres away from the main road and surrounded by thick vegetation.

Entering the farm entailed a slow, bumpy ride on a winding and narrow dirt road.

A worker told ST that the farm had a capacity of about 200,000 chickens.

It contained about 25 coops, each averaging the size of three tennis courts.

In one of the larger coops, there were 8,000 chickens which were all bound for Singapore in the coming days, the worker said.

He added that the coop had a capacity of 16,000 chickens, but that it has been unable to hit full capacity due to numerous factors.

"There has been a shortage of workers because of the pandemic, and we have not been able to get more (work) permits approved," he said.

"The price of chicken feed has also risen because of the war in Ukraine."

A key component of chicken feed is maize. Prices of maize have shot up because of the war, as Ukraine is a major supplier of the world’s maize.

The worker added that bad weather had affected the number of chickens that ultimately made it to sale.

Other workers demonstrated how they lifted the large sacks of chicken feed to pour into the feeding trays, and said their arms are strained from working extra hard in recent days trying to fatten up the chickens faster.

While chickens are typically exported to Singapore at around 40 days old, the farms are now exporting the chickens when they are around 33 days old.

Inside the coops ST was able to observe, thousands of chickens shared the space with swarms of flies.

A farmer told ST that while the farm previously had about two lorries visiting a day to collect and ferry some 6,000 chickens across the Causeway, this has since increased to six lorries daily.

A farmer said that it is unlikely that farmers are hoarding chickens as any profit would be wiped out by the need to feed and care for them longer.

"Every extra day we keep them instead of selling them increases our costs, and if we are hoarding, then when we do sell, we'll be making losses," he said.

He added that many farmers like himself are now left frustrated with the situation, as they are afraid they may lose customers in Singapore permanently after the ban.

"If Singaporeans find alternatives, they may not buy our chickens any more even after the ban is lifted," he said.

"If the Singapore authorities offer us space to raise chickens there instead, I will definitely be the first one to move all our operations over." - The Straits Times/ANN 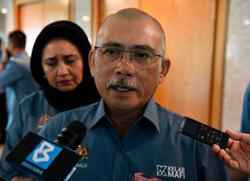