NARATHIWAT (The Nation/Asia News Network): A soldier and two defence volunteers were injured when a group of insurgents opened fire and hurled pipe bombs at a marine police station in Narathiwat province on Wednesday (may 25) night, police said.

The attack on the Tak Bai Marine Police Station in Tambon Jeh He of Tak Bai district happened at 9.30pm. It was followed by another explosion in front of a convenience store about 1.3km away about five minutes later.

Police said an unknown number of assailants opened fire and hurled bombs at the station, resulting in exchange of gunfire.

The marine police station caught fire after the explosion. The sound of gunfire by both sides terrified both Thai and Malaysian residents.

The station is located on the border and Malaysians were seen standing at the border fence to observe the fighting while Thai residents scrambled for cover.

After the assailants retreated and the gunfire stopped, a soldier and two defence volunteers manning a security checkpoint in front of the police station were found to be injured.

They were identified as Pvt Sulaiman Yusoh, 23, Opas Saensom, 33, and Ekkawat Ketduang, 41. They were injured by bomb shrapnel. Ekkawat suffered more serious injuries as a piece of shrapnel hit the body above the hip.

The three were rushed to the Tak Bai Hospital to receive primary treatment before being moved to the Narathiwat provincial hospital.

Five minutes after the attack on the police staion, an explosion occurred outside a convenience store in Ban Taba village in Tambon Jeh He. No one was injured in the second incident. 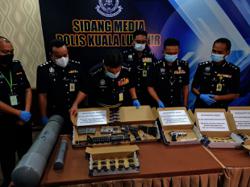