A trishaw ride in the capital. - BB

BANDAR SERI BEGAWAN (Borneo Bulletin/Asia News Network): The BandarKu Ceria Programme (BKC) resumed on Sunday (May 15) after its hiatus during the fasting month, enlivening the capital as families and individuals took part in recreational activities.

Some roads leading into the capital were closed from 6am to 10am to make way for activities, which drew fitness enthusiasts such as runners and cyclists. People could also be seen taking a ride on a decorated trishaw, while young children played freely.

An open air bazaar could also be found across the Royal Regalia building, though the area was cordoned off and accessible only after scanning the BruHealth QR code and a temperature check.

As BKC resumes its regular Sunday showing, the Ministry of Home Affairs reminded the public to adhere to the Early Endemic Phase guidelines for facilities, fitness and recreational activities as well as big gatherings. 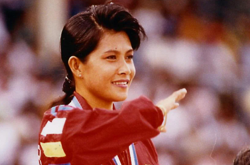