In this picture taken on November 11, 2021, Philippine Senator Manny Pacquiao gestures during an interview with AFP at his residence in Manila. Philippines presidential hopeful Manny Pacquiao is also a boxing legend having won many international world titles. - AFP

MANILA, Dec 23 (Bloomberg): Four presidential aspirants in the Philippines had varying strategies to resolve disputes in the South China Sea including through building alliances with other nations and boosting military presence in the region, according to interviews with GMA News.

"Our court victory should be our leverage,” Robredo said. She said a coalition of nations could be formed against China’s militarization of the disputed sea, banking on the 2016 ruling of the Hague-based Permanent Court of Arbitration which rejected China’s nine-dash claim.

Lacson said the Philippines should strengthen alliances with the US, the European Union, Japan, Australia and other countries with strong militaries.

Pacquiao said the Philippines shouldn’t allow itself to be bullied by China and sought more discussions on the issue, while Moreno pointed out the need to bolster the country’s military presence in the South China Sea.

The four presidential candidates, competing in the elections scheduled for May 9, all said they’re in favor of joint exploration in the South China Sea, with Robredo clarifying that her stance is premised on all parties’ recognition of the arbitral ruling. - Bloomberg 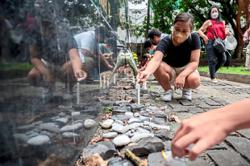 Asean News Headlines at 9pm on Sunday (May 22, 2022)
Singapore reports 2,827 new Covid-19 cases as its total infection now stands at 1,269,635 as of Sunday (May 22)
Skills training, job matching, boost investor confidence in Kendal Industrial Park in Indonesia
Chadchart Sittipunt: Bangkok’s new governor is a ‘man of the people’
It's below 5,000 cases now as Thailand records 4,739 Covid-19 cases and 31 deaths on Sunday (May 22)
SEA Games: Philippines women bag much-treasured basketball gold after men suffer shock defeat at the hands of Indonesia
Infections are dipping as Vietnam reports 1,319 new Covid-19 cases on Sunday (May 22)
Penang MMEA detains two barter trade ships from Myanmar
SEA Games: I gave it my all, says Loh Kean Yew after Singapore's world champion falls to Thai in final
World in one of the most severe energy crises since 1970s, says WEF