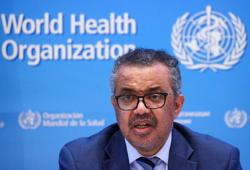 Out and about: Tourists dining out at a cafe at Khaosan Road, one of the favourite tourist spots in Bangkok. — Reuters

Ghebreyesus made this remark to Public Health Minister Anutin Charnvirakul after a special session of the World Health Assembly in Geneva, Switzerland, on Tuesday.

Traisulee said Anutin attended the special session to discuss with Ghebreyesus the possibility of allowing Thailand to join WHO’s BioHub System and Universal Health Preparedness and Response in a bid to share experiences in preparation for health emergencies.

“Meanwhile, the public health minister took the opportunity to talk about Thailand’s healthcare mechanisms, such as village health volunteers, subdistrict health-promoting hospitals and our mix-and-match vaccine strategy, which enabled the country to effectively deal with the Covid-19 crisis,” Traisulee said.

She also said Ghebreyesus advised Anutin to join the African Vaccine Association Trust if Thailand was willing to donate Covid-19 doses to countries with low access to vaccines.

“In this regard, Anutin told the WHO chief that he would discuss the issue with Prime Minister Prayut Chan-o-cha,” Traisulee said. — The Nation/ANN