BANGKOK, Oct 15 (The Nation Thailand/ANN): If the four southern border provinces can vaccinate 70 per cent of their population in time, they may be able to reopen their borders connected to Malaysia from December 1.

This was announced by Tourism and Sports Minister Phiphat Ratchakitprakarn said after a meeting with Public Health Minister Anutin Charnvirakul, who visited the provinces to monitor the Covid-19 situation.

Phiphat discussed with the Royal Thai Consulate-General of Penang the possibility of including Kedar in a so-called “travel bubble” between Malaysia’s Langkawi and Koh Lipe in Satun as ferries can connect the two countries.

Meanwhile, the Centre for Covid-19 Situation Administration (CCSA) has gave the green light for curfew time to be reduced. From Saturday (Oct 16), curfew will be from 11pm to 3am.

He also said that elderly daycare centres can open as usual.

“Meanwhile, public transport will be allowed to carry more passengers on board,” Taweesin added.

Strict measures are also lessened in many provinces in the country from Saturday onwards. - The Nation Thailand/ANN 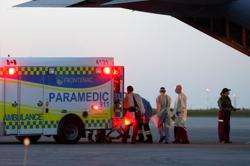