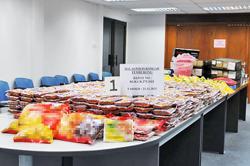 Police personnel at a roadblock during Operasi Pulih. - Borneo Bulletin/ANN

According to Brunei's Ministry of Health, all the new cases are local infections. While the source of infection of 92 local cases is still under investigation.

There are currently 2,223 active cases being treated and monitored at the National Isolation Centre.

A total of 6,880 recovered patients and 64 deaths have been reported so far in the country.

Personnel from the Kampong Ayer Police Station arrested two men and one woman, during an Operasi Pulih patrol and roadblock on Saturday.

The Royal Brunei Police Force (RBPF) said that the 52-year-old woman was found near the Sungai Kebun Fire Station at 12.43am, while allegedly attempting to sell four cartons of contraband cigarettes.

The two men, aged 56 and 43, were allegedly caught in the attempt to buy the contraband cigarettes.

The three suspects are being investigated under the Infectious Diseases Act, Chapter 204, for violating the enhanced restrictions during Operasi Pulih, as well as the regulations under the Royal Customs and Excise Department (RCED) and the Road Taffic Act, Chapter 68, for an expired road tax.

Minister of Health Dato Seri Setia Dr Mohd Isham Jaafar said, “In the outcome from the multi-agency enforcement monitoring carried out during the out-of-house restrictions from 8pm until 4am, 30 violations of the nationwide directives were issued with compound fines.

According to the RBPF, 20 of the violations were recorded in the Brunei-Muara District and 10 in the Belait District.

No violations were recorded in the Tutong and Temburong districts, on October 9-10.

The latest figures bring the current total of violations to 209, since the start of Operasi Pulih on October 4. - Borneo Bulletin/ANN