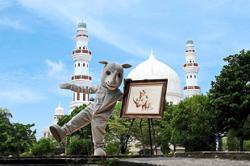 JAKARTA, Sept 25 (Jakarta Post/ANN): The Javan rhinoceros, which is among the most critically endangered species in Indonesia, is under threat from natural disasters and inbreeding as a result of its small population, the staff of Ujung Kulon National Park in Banten have warned.

The Javan rhino is listed as a critically endangered species by the International Union for Conservation of Nature (IUCN) red list because of its small population.

The species, which previously inhabited parts of other South-East Asian countries such as Vietnam and Thailand, is now only concentrated in the national park.

The national park’s spokesperson Andri Firmansyah said the Javan rhino population in the park was recorded at 75 animals as of June.

According to observations from camera traps installed around the park, four new calves were caught on camera between March and June.

This figure was a slight improvement from an estimated 68 rhinos living in the park, around a third of which were thought to be reproductive individuals, according to data from the IUCN in 2018.

Andri said while the rhinos were generally in good health, concerns remain over the species’ long-term future.

“Our main concerns are related to inbreeding, as well as threats of tsunami, given that the location of our national park is close to the sea,” Andri told The Jakarta Post recently.

The rhino’s relatively small population and its concentration in a single habitat means that it is prone to species inbreeding, which could cause genetic disorders and loss of genetic variability and undermine the vitality of the species, making it more vulnerable to diseases.

Researcher from the Bogor Institute of Agriculture (IPB) in West Java Muhammad Agil said further studies needed to be conducted to mitigate the negative impact of inbreeding.

The Ujung Kulon National Park is situated at the westernmost tip of Java Island in close proximity to the Sunda Strait.

The national park was among the areas hit by the Sunda Strait tsunami in December 2018, which was triggered by an underwater landslide following increased volcanic activity on Anak Krakatau (Child of Krakatau), which is located in the strait.

The disaster, however, is not believed to have had an impact on the population of the Javan rhino.

In addition to natural disasters and inbreeding, Andri said that the Javan rhino was also prone to animal diseases, particularly if they interacted with livestock from local villages, which are often allowed to roam free in the national park area.

IPB’s Agil said a new habitat outside of Ujung Kulon needed to be developed in order to safeguard the rhinos from the threats of natural disasters such as tsunamis or volcanic activities.

“The Javan rhino is the biggest endangered mammal in the world because it cannot be found anywhere else other than in the Ujung Kulon National Park,” said Agil. “Which is why we need to protect it.” - The Jakarta Post/ANN
Article type: metered
User Type: anonymous web
User Status:
Campaign ID: 46
Cxense type: free
User access status: 3
Join our Telegram channel to get our Evening Alerts and breaking news highlights