Out in force: A file photo showing protesters at a demonstration against the military coup in Yangon. The country has been in turmoil since the army ousted Suu Kyi in February. — AFP

The junta chief said that elections would be held and a state of emergency lifted by August 2023, extending the military’s initial timeline given when it deposed Aung San Suu Kyi six months ago.

The country has been in turmoil since the army ousted the civilian leader in February, launching a bloody crackdown on dissent that has killed more than 900 people according to a local monitoring group.

A resurgent virus wave has also amplified havoc, with many hospitals empty of pro-democracy medical staff, and the World Bank has forecast the economy will contract by up to 18%.

In a televised address junta leader Min Aung Hlaing said “we will accomplish the provisions of the state of emergency by August 2023”.

“I pledge to hold multiparty elections without fail,” he added.

The general’s announcement would place Myanmar in the military’s grip for nearly two and a half years – instead of the initial one-year timeline the junta announced days after the coup.

The army has justified its power grab by alleging massive fraud during 2020 elections won by Suu Kyi’s National League for Democracy in a landslide, and has threatened to dissolve the party.

Last week it cancelled the results of the polls, announcing it had uncovered over 11 million instances of voter fraud.

Suu Kyi has been detained since Feb 1 and faces an eclectic raft of charges – from flouting coronavirus restrictions to illegally importing walkie talkies – which could see her jailed for more than a decade.

International pressure, including sanctions targeting the military, has done little to knock the junta off course.

Asean leaders in April called for an “immediate cessation of violence” and a visit to Myanmar by a regional special envoy, an agreement that was later walked back by Min Aung Hlaing.

He has chaired the military-backed State Administration Council (SAC) that has run Myanmar since it was formed just after the Feb 1 coup, and the caretaker government will replace it.

“In order to perform the country’s duties fast, easily and effectively, the state administration council has been reformed as caretaker government of Myanmar,” a newsreader on state Myawaddy television said.

Protesters in the northern town of Kale held banners reading “strength for the revolution” while demonstrators let off flares at a march in the commercial capital Yangon.

Tens of thousands of civil servants and other workers have either been sacked for joining rallies or are still on strike in support of a nationwide civil disobedience campaign.

The NLD saw their support increase in the 2020 vote compared to the previous election in 2015.

In a report on the 2020 polls, the Asian Network for Free Elections monitoring group said the elections were “by and large, representative of the will of the people”. — Agencies 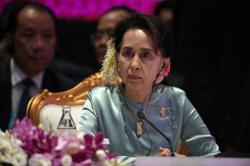