Sandbox gets its first coronavirus case

A UNITED Arab Emirates national became the first person travelling under the Phuket Sandbox scheme to test positive for Covid-19.

Phuket authorities reported yesterday that he was one of the 2,113 people who have landed on the island since July 1.

He tested positive upon arrival and was taken to a local hospital.

The authorities did not reveal the traveller’s date of arrival but said others on the same flight were put under quarantine.

As per the sandbox scheme, tourists who can verify they are fully inoculated against Covid-19 and test negative can fly into Phuket and move around freely in the province without having to quarantine.

After 14 days in Phuket and if they still test negative, the tourists can then travel elsewhere in Thailand.

A similar scheme called the “Samui Plus Model” will be applied to Surat Thani’s three resort islands – Samui, Pha-ngan and Tao – which are set to open from July 15. — The Nation/ANN 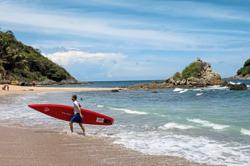