BANDAR SERI BEGAWAN (Borneo Bulletin/ANN): Relations between Brunei Darussalam and Russia have been steadily growing from strength to strength in many areas in the last three decades, Ambassador of the Russian Federation to Brunei Darussalam Vladimir Borisovich Goncharenko said in his speech during a Russia Day event at Rizqun International Hotel on Tuesday (June 8).

These areas include trade, science, education, politics, security, defence and addressing new challenges and threats, the ambassador said at the reception.

The ambassador highlighted the friendly nature of Russia-Brunei ties, whose 30th anniversary is marked this year, before emphasising the significance of regional cooperation, particularly in the context of Brunei Darussalam’s Asean Chairmanship in 2021.

Minister at the Prime Minister’s Office and Minister of Finance and Economy II Mohd Amin Liew Abdullah was the guest of honour.

Representatives of Brunei ministries and agencies, armed forces and business circles, heads of diplomatic missions, prominent figures of science and culture as well as the media attended the event.

The speech was followed by the cake-cutting and presentation of gifts. 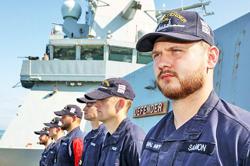