Making a mark as an unlikely solar champion

Sunnier days ahead: The plunging price of solar panels, many of which are assembled domestically, has created a cheap and convenient alternative to fossil fuels. — Bloomberg

Nguyen Tuan was watching the sun shine down on his 4ha cantaloupe farm in southern Vietnam when he realised it could do more than help his crops grow.

The 46-year-old installed 40 solar panels on greenhouses at his farm 88km outside of Ho Chi Minh City. Thanks to generous subsidies from the national utility, he not only cut his power bill but now earns about two million dong (RM359) a month selling excess electricity to the nation’s grid.

Tuan’s farm is just a tiny part of the extraordinary 100-fold increase in solar power that’s taken place in Vietnam over the last two years.

The South-East Asian nation now ranks seventh in the world in terms of capacity, according to clean energy research group BloombergNEF, and in 2020 the only countries that installed more solar panels were the US and China.

The solar surge didn’t come from a government push to cut carbon pollution.

In fact, Vietnam isn’t among the more than 100 countries with a net-zero target in the decades ahead. Instead, the embrace of solar is being driven by global forces.

Foreign banks are limiting funding to fossil fuels projects, meaning Vietnamese utilities have struggled to get loans for new coal plants. At the same time, the plunging price of solar panels, many of which are assembled domestically, has created a cheap and convenient alternative.

“I have never seen a country explode like this in solar, ” said Logan Knox, chief executive of Vietnam operations of UPC Renewables, which builds and operates wind and solar farms across Asia. “It’s almost unbelievable.”

That same shift to clean energy needs to happen in more developing countries if emissions worldwide are to be zeroed out by mid-century – a timeline needed to avoid catastrophic global warming.

Vietnam is an encouraging sign that global efforts to discourage the use of fossil fuels and boost the accessibility of clean alternatives are bearing fruit.

“What Vietnam’s solar boom shows is how much capacity you can build in a short period of time, ” said Caroline Chua, a BNEF analyst. — Bloomberg 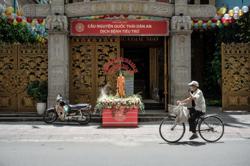