MANILA, May 16 (Reuters): Philippines President Rodrigo Duterte reduced the tariff for imported rice on Saturday (May 15) to ensure food security and protect consumers in the world's biggest importer of the grain.

The Southeast Asian nation, which is battling elevated inflation, took into consideration the increase in global rice prices and uncertainties in local rice supply, the president's office said in a statement.

In an executive order, Duterte cut the Most Favoured Nation (MFN) tariff rates on rice to 35% from 40% for in-quota purchases and 50% out-quota volume for one year "to diversify the country's market sources, augment rice supply, maintain prices affordable, and reduce pressures on inflation."

In January, the agriculture ministry projected the country to import at least 1.7 million tonnes of its staple food this year to fully cover domestic requirements. It buys more than 90% of import requirements from Vietnam.

More than 20 tropical storms hit the Philippines annually, with the strongest typhoons destroying crops like rice and corn in the second half, the peak harvest season.

The tariffs were higher than previously-announced rates after opposition by the local hog industry. 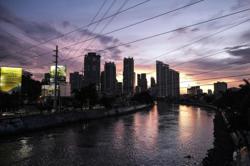