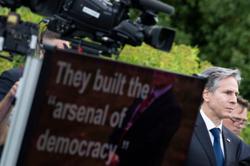 South Australian farmer Corey Blacksell said the biggest eye-opener for him last year was not so much the deteriorating relations between Australia and its biggest trading partner, but how Australia had become so complacent in its reliance on that one export customer: China.

The level-headed grain farmer, operating out of Pinnaroo town near the border with Victoria, counted himself among those fortunate farmers who nimbly managed to avoid financial ruin by replacing barley with other grains as China imposed anti-dumping duties on barley last May and later banned it.

This was, in part, because he had seen the writing on the wall for years. And he was not shy about raising his concerns – including on social media and directly to the state and federal governments – about Australia’s over-reliance on a single market. But those cries of concern appear to have fallen on deaf ears.

“It was probably a mistake that Australia, as a trading nation, elected to create a ‘monopoly’ end-user, which is the most dangerous way to be. Because when they withdraw from the market, you’ve actually lost all of your market, ” he said.

“Why has there been such a single focus on China? It’s not about China, as such, but why such a focus on a single market? It is a very poor business strategy.” He conceded that both exporters and governments enjoyed bountiful returns from premium prices and strong demand from the Chinese market over many years, but Blacksell said that governments – particularly at the state level – should not have directed their energy toward cultivating that market.

For example, he pointed to state government officials courting Chinese businesses to invest in or buy from their exporters.

“Other than establishing free-trade agreements, governments don’t have a role in establishing markets, per se. They need to ensure all of the obstacles are out of the way so traders can trade as free as they like, ” he said.

“It’s not that we don’t want to trade with China ... we just don’t need a ‘monopoly’ market for our produce.”

“Other than establishing free-trade agreements, governments don’t have a role in establishing markets, per se. They need to ensure all of the obstacles are out of the way so traders can trade as free as they like, ” he said.

“It’s not that we don’t want to trade with China ... we just don’t need a ‘monopoly’ market for our produce.”

China and Australia have been locked in an escalated political conflict for more than a year. It boiled over when Australia pushed for an international inquiry into the origin of the coronavirus without consulting Beijing last April. Ever since then, trade between the two countries had borne the brunt of the tensions, sparking calls for diversification and even “economic decoupling”. Barley is just one of many Australian exports that have either been unofficially banned or obstructed with new anti-dumping tariffs, or both.

But diversification – especially a deliberate detouring of supply and demand – can be complex, as a free market means supply will seek to meet demand, and demand for Australia in this case lies in China, economists say. Forcing a diversification of trade can upset the free-market balance, which likely explains why the government gave traders free rein to pursue Chinese sales.

“Can the federal government really tell a business to diversify, and that’s that?” said Tim Harcourt, industry professor and chief economist at the University of Technology Sydney.

He cited a South Australian wine exporter who manufactured a special red wine for the city of Qingdao in China’s Shandong province, noting that she was unable to “suddenly walk away from that lucrative contract and go somewhere else”.

“She wouldn’t have been keen to switch cities, let alone countries, ” he said.

“If countries other than China do not want to buy our iron ore, have holidays here, buy our barley, we cannot make them, ” Koukoulas said.

Trade, however, is not always about the free market, explains Harcourt, and governments do have some say in trade relationships.

“There’s a lot of government fiat involved – direct regulatory decisions – that affect trade, and the government itself is involved in trade. When you think of defence, education, research and development, and health care, a lot of trade is government-to-government, ” he said. “Can we diversify? The answer is we are always diversifying in terms of trade. That’s why governments negotiate bilateral trade agreements and the like.”

Ever since last year’s trade disruptions – which hurt not only Australian barley but also coal, wine and lobsters, among other goods – the Australian government has negotiated and solidified new trade pacts with countries such as Britain and Indonesia.

But the question is whether it has come a little too late, Blacksell said. He pointed to a 2019 survey of 500 grain farmers by the industry group GrainGrowers that revealed the farmers considered “access to more markets” a priority, along with a reduction in red tape and better transport.

Even when the Australian government raised concerns over “shaky” relations with China between 2016 and 2018, particularly amid China’s aggressiveness in the South China Sea and alleged political interference in Australian domestic politics, it did not expedite diversification, according to economists and analysts.

“I don’t believe there was any effort or attempt to promote diversification – for as indicated earlier, the market[s] were already [perceived to be] very diverse. In hindsight, things might have been shaky, but let’s call it complacency – no one thought things were ever going to get this bad, ” Perth-based agribusiness consultant Peter Batt said.

In late 2019, however, an Australian parliamentary inquiry was launched to look into balancing exports with national interest.

Australian export industries such as the embattled wine sector – now banned from selling to China – gave evidence of being “overexposed to China” but found it hard to “look to other markets when they are doing so well” there.

The inquiry’s report concluded last May, recommending that the Australian government “conduct an assessment of Australian export industries that are overexposed to a single market, and to work with industry towards diversification”, just as China executed its first trade action against Australian exports: an 80.5 per cent anti-dumping duty on barley.

The government responded to the recommendation by vowing to identify new markets for exporters, although it said “businesses ultimately decide where they export”.

A second and more direct parliamentary inquiry into diversification was conducted in February 2020, and exporters said the governments’ focus on China was “at times to the detriment of other markets”, putting them at the mercy of potential political disputes.

At this juncture, a better approach was for the government to provide fiscal support to industries hurt by trade disruptions, rather than sticking with diversification, said Richard Holden, a professor of economics at the University of New South Wales.

Fast forward a year, and Blacksell is now devising new ways to better control his supply chains while considering selling smaller parcels of his grains directly to buyers and end-users.

Despite the tough times, barley exports have fared relatively well for traders such as Blacksell. As a result of the reorganisation of global barley supply chains, Australian barley has found new markets in Saudi Arabia and elsewhere.

But not everyone is feeling as upbeat.

The trade disruptions have hit close to home for one of Australia’s most vivacious ambassadors for beef, New South Wales cattle farmer Robert Mackenzie, whose beef exports to China have fallen 50 per cent over the past year even though this business was not directly targeted by any Chinese bans or duties.

“It’s disappointing, as we have a good product the Chinese consumer wants; it does make you feel down, ” he said.

Any growth he had hoped for in the past year has vanished, but he has had time to focus on launching a “traceability” smart label that tracks the journey of his beef from farm to fork and gives consumers more confidence in food safety.

He is also trying to maintain his relationships with Chinese clients, because it took him a long time to build them. His hope is that the strained China-Australia relationship will see a reset by year’s end.

“Both countries share a lot of interests and have had a great relationship over many years, ” he said. “It’s important that we get back to what we all do best, and to communicate.” - South China Morning Post