SEOUL (Bloomberg): South Korea, which has invested billions of dollars in overseas coal plants, is debating whether to halt financing further projects amid pressure to accelerate climate efforts ahead of President Joe Biden’s summit next week.

The discussions follow mounting pressure from the US which wants the Asian nation to stop backing coal-fired power plant developments abroad as well as bolster emissions reduction targets at home, according to government officials who requested anonymity to discuss private talks.

Biden’s climate envoy John Kerry is scheduled to arrive in Seoul this week for talks ahead of a virtual White House climate summit on April 22.

The US has asked South Korea to review the possibility of withdrawing from coal plant projects in Vietnam and Indonesia, one of the people said.

The White House also requested that South Korea increase its emissions reduction goal, or Nationally Determined Contribution, but it’s unlikely that the country will be able to revise the target during the summit because there hasn’t been enough discussion within the government, according to two of the people.

Korea’s NDC target, which currently aims to lower emissions by 24.4% by 2030 from 2017 levels, will likely be revised later this year as President Moon Jae-in indicated that he desired to bolster the goal before his term ends in May 2022, they said.

Maeil Business Newspaper earlier reported that relevant ministries are preparing to make an announcement to end state funding for overseas coal projects during the summit. The Ministry of Trade, Industry and Energy declined to comment on the matter.

"Given South Korea’s carbon neutrality goal and its economic stance, it makes sense for the country to be asked to withdraw from the coal projects in Indonesia and Vietnam, ” Hong Jong Ho, a professor at Seoul National University Graduate School of Environmental Studies, said by phone. "There’s even an on-going discussion to scrap local coal plants that are already under construction, so pulling out from the planned overseas projects is something Kepco should deeply consider.”

Government backed financial institutions have been a driver in the coal sector, investing about 10.7 trillion won ($9.6 billion) in overseas coal plants between 2009 and June 2020, according to a joint report released last year by Korea Sustainability Forum and Greenpeace.

The Export-Import Bank of Korea and Korea Trade Insurance Corp., the two biggest investors, have spent 4.9 trillion won and 4.7 trillion won, respectively, on overseas projects during the period, the report said. 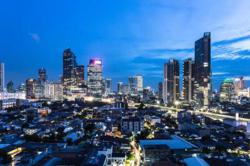