PHNOM PENH, March 6 (Xinhua): Cambodia has decided to restrict travel to and from Southwestern Preah Sihanouk province after a rise in the Covid-19 cases there in recent days.

Preah Sihanouk Provincial Governor Kuoch Chamroeun said in a statement that persons and vehicles are not allowed to travel in and out of the province, with an exception for vehicles for transporting goods.

"Ferrying people by buses, taxis and other passenger carrying vehicles to and from Preah Sihanouk must be temporarily suspended until further notice," he said. "For cargo vehicles, they are still allowed to enter and leave the province, but the number of persons on each vehicle is limited to two only - a driver and a conductor."

"For people living in Preah Sihanouk, please do not travel out of the province to other cities or provinces until further notice," he added.

The governor also called on residents to stay at home and avoid unnecessary gatherings.

Cambodia confirmed the third community Covid-19 outbreak on Feb. 20, with more than 400 people infected so far, most of them reside in capital Phnom Penh and Preah Sihanouk province. 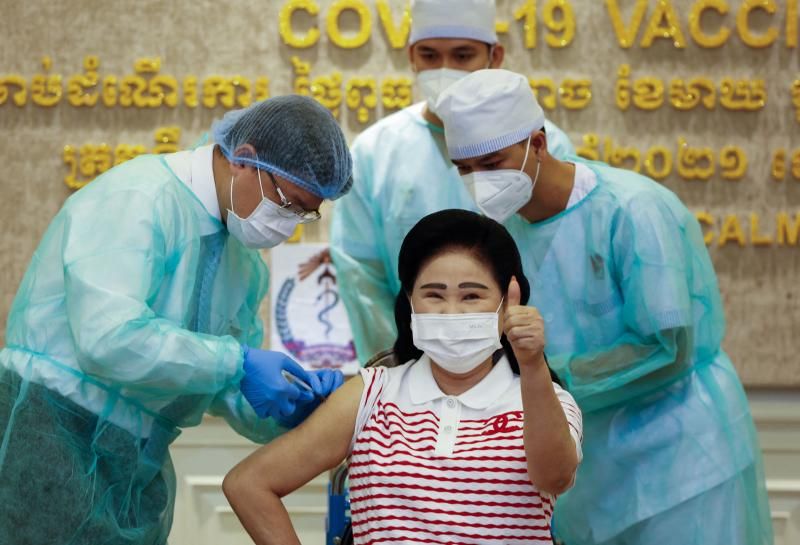 Cambodian Prime Minister Samdech Techo Hun Sen recently also called on people in provinces not to travel to Phnom Penh in a bid to contain the spread of the virus.

The new cases were found in capital Phnom Penh, Preah Sihanouk province, Koh Kong province and Kandal province, the statement said, adding that they were all related to the third community outbreak on Feb. 20.

The patients are currently undergoing treatment at various designated Covid-19 hospitals, it said.

In a bid to contain the outbreak, schools, gyms and entertainment venues as well as dozens of businesses have been temporarily closed.

Cambodia launched an anti-Covid-19 vaccination drive on Feb. 10. According to official data, as of Thursday, some 140,000 people in the priority groups had been inoculated with the vaccine.