Myanmar under emergency for a year after Suu Kyi's arrest, US and Australia call for her release (Update) 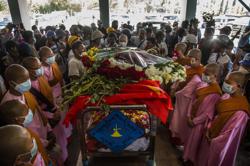 YANGON (Agencies): A state of emergency for one year was declared in Myanmar on Monday (Feb 1), hours after leader Aung San Suu Kyi and other senior figures from the ruling National League for Democracy (NLD) party were detained in an early morning raid.

The Myanmar army has stated that power has been handed to Commander-in-chief of the armed forces Min Aung Hlaing for a year.

The move comes after days of escalating tension between the civilian government and the powerful military that stirred fears of a coup in the aftermath of an election the army says was fraudulent.

NLD spokesman Myo Nyunt told Reuters by phone that Suu Kyi, President Win Myint and other leaders had been "taken" in the early hours of the morning.

"With the situation we see happening now, we have to assume that the military is staging a coup," he said.

"I want to tell our people not to respond rashly and I want them to act according to the law," he said, adding he also expected to be detained.

It is understood that the military had also seized control of Yangon city hall.

An AFP journalist saw five military trucks inside the city hall compound, with soldiers turning people away as they arrived for work.

The United States, in responding to the attempted coup, warned Myanmar to reverse course, a White House spokeswoman said.

"The United States opposes any attempt to alter the outcome of recent elections or impede Myanmar's democratic transition, and will take action against those responsible if these steps are not reversed," White House spokeswoman Jen Psaki said in a statement, adding that President Joe Biden has been briefed on the situation.

"We call on the military to respect the rule of law, to resolve disputes through lawful mechanisms and to release immediately all civilian leaders and others who have been detained unlawfully," foreign minister Marise Payne said in a statement.

Residents in Yangon said mobile Internet data connections and some phone services were disrupted in the city.

State-run MRTV television said in a Facebook post that it was unable to broadcast due to technical issues.

A military spokesman did not answer phone calls seeking comment.

An NLD lawmaker, who asked not to be named for fear of retaliation, said another of those detained was Han Thar Myint, a member of the party’s central executive committee.

Elsewhere, the chief minister of Karen state and several other regional ministers were also held, according to party sources.

Nobel Peace Prize winner Suu Kyi, 75, came to power after a 2015 landslide election win that followed decades of house arrest in a struggle for democracy that turned her into an international icon.

Her international standing was damaged after hundreds of thousands of Rohingya fled army operations into refuge from Myanmar’s western Rakhine state in 2017, but she remains hugely popular at home.

Parliament had been due to start sitting there on Monday after a November election the NLD had won in a landslide, hammering a pro-military party.

The circumstances of the country’s newly elected MPs were unclear.

Myanmar’s military had said on Sunday it would protect and abide by the Constitution and act according to law after comments earlier in the week had raised fears of a coup.

The military "will do everything possible to adhere to the democratic norms of free and fair elections, as set out by the 2008 Constitution, lasting peace, and inclusive well-being and prosperity for the people of Myanmar," it said in the statement, posted on Facebook.

Myanmar’s election commission has rejected the military’s allegations of vote fraud, saying there were no errors big enough to affect the credibility of the vote.

The Constitution reserves 25 per cent of seats in Parliament for the military and control of three key ministries in Suu Kyi’s administration.

John Sifton, Asia advocacy director for Human Rights Watch, said Myanmar’s military had never submitted to civilian rule and called on the United States and other countries to impose "strict and directed economic sanctions" on the military leadership and its economic interests.

Historian and author Thant Myint-U said: "The doors just opened to a very different future. I have a sinking feeling that no one will really be able to control what comes next. And remember Myanmar’s a country awash in weapons, with deep divisions across ethnic and religious lines, where millions can barely feed themselves."

Myanmar state media unable to broadcast due to 'communication issues' 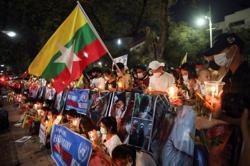 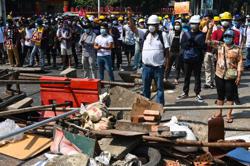