A medical worker in a protective suit helps a resident to register outside at a residential area at Jordan where tens of thousands of its residents will be in Hong Kong, China on Friday (Jan 22, 2021). - Reuters

HONG KONG, Jan 22 (Bloomberg): Hong Kong is preparing to lock down thousands of residents in a bid to contain a worsening outbreak of the coronavirus, local media outlets reported Friday, citing unidentified people.

The lockdown is expected to begin this weekend, and involve 150 residential buildings in Yau Tsim Mong, the core urban district of Kowloon, the South China Morning Post said. It will affect between 4,000 and 9,000 residents, covering a mandatory testing area where aging buildings and subdivided flats populated by lower-income families are common.

While reports first emerged early on Friday that the lockdown was coming, by 5 p.m. the government was still declining to comment, leading to confusion as media outlets revised their reporting. SCMP earlier reported that the lockdown would impact tens of thousands of people and would include parts of Sham Shui Po, but it later scaled back those numbers and said the district would not be affected.

A spokeswoman for Chief Executive Carrie Lam’s office referred queries to the city’s food and health bureau. A representative for the bureau declined to comment, while Chuang Shuk-Kwan, a Hong Kong health official, also declined to comment on lockdown speculation during a daily briefing. The reported measures pale in comparison with the lockdowns adopted in mainland China, where a hardline approach bans people from leaving cities, districts or even their apartment complexes. But it still would be one of the most severe steps Hong Kong has taken to control the pathogen, and a blow to the government’s approach of trying to keep the economy largely running during the pandemic.

Hong Kong’s government has faced criticism for the confusing and inconsistent nature of the city’s pandemic response, leading to a sense of fatigue among business-owners and residents. A rise in cases, while far less dramatic compared with global cities such as London and New York, has spurred the government to put in place more restrictions such as the closure of schools and some businesses.

But until now Hong Kong has been reluctant to adopt stricter measures such as lockdowns, out of concern they could ignite a crisis in a city that has already been rocked by protests.

Even a limited lockdown in Hong Kong would introduce heavy restrictions of movement in the highly populated city with some of the smallest living spaces in the world -- the average apartment is about 500 square feet. It’s not uncommon for poorer residents in the affected Kowloon areas to live in spaces big enough only for a bed, with communal kitchen and toilet facilities.

Only residents who show negative Covid-19 test results will be allowed to leave the lockdown area, according to the SCMP report, specifying that exemptions will be allowed for those who need to seek medical consultation or face physical harm.

HK01 said each building would be guarded by government staff to ensure people leaving the building have a negative test result. They will also send enforcement officials to each flat to ensure residents have taken a test.

Shops in the designated areas will remain closed, with government employees providing food and daily necessities to residents in need, SCMP reported.

The lockdown will be "bad news for most low-income residents living in these areas as many of them will lose their jobs if not able to go out,” said Sze Lai Shan, a community organiser for nonprofit Society for Community Organization who works with families in the city’s poorest communities, including Yau Tsim Mong. 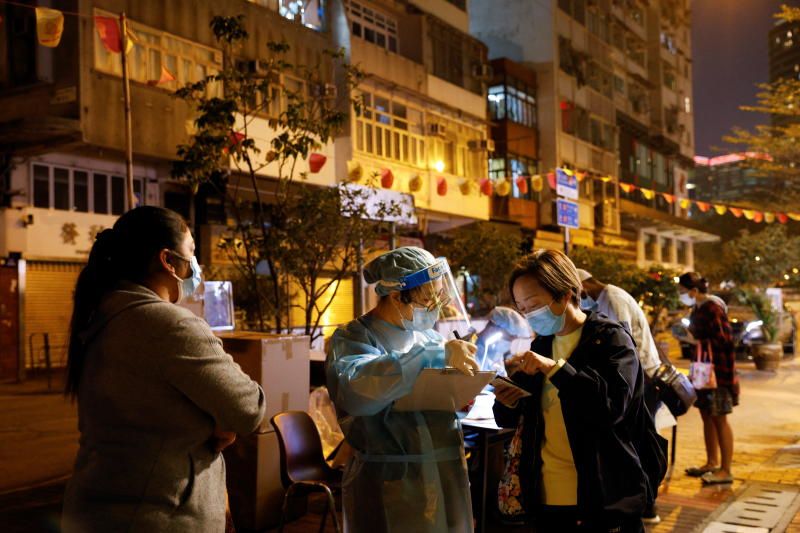 Sze said many people in these areas are working for hard-hit industries including restaurants and construction projects. More than 80% of residents the organization is helping either have lost their jobs or seen pay cuts, and Sze said more people are now in need as Hong Kong’s economic condition is worsening.

While the lockdown neighborhood is located in an older, lower-income district of Kowloon, the city’s density means it’s a stone’s throw from glittering skyscrapers like the International Commerce Centre, where the offices of Morgan Stanley and Credit Suisse Group AG are located.

The lockdown will only be lifted when the government is satisfied that everyone has been tested in the area, the SCMP report said. More than 18,000 residents in the broader Yau Ma Tei area were tested at venues arranged by the government from Jan. 16 to 19.

Leung Chi-chiu, former chairman of the Hong Kong Medical Association’s advisory committee on communicable diseases, said the more stringent measures are meaningless because cases are already being found outside the designated areas. The spread will continue through cross-transmission within families and across multiple incubation periods, Leung said.

Hong Kong has seen 168 deaths from Covid-19 -- still roughly half the toll inflicted on the city from the 2003 Severe Acute Respiratory Syndrome, or SARS, pandemic, which killed nearly 300 people in the early 2000s.