HONG KONG (China Daily/ANN): Leading international online marketplace Lazada made the most of the Singles Day shopping extravaganza this month, cashing in on the e-commerce boom in Southeast Asia during the pandemic.

This year, the annual Nov 11 buying bonanza came with the e-commerce industry in the region enjoying rapid growth as the contagion and related lockdowns accelerated the digital shift in consumption.

This is in sharp contrast to many other industries, which are reeling from the unprecedented economic pressure caused by Covid-19.

Jessica Liu, co-president and regional head of commercial at Lazada Group, said that in the second quarter of this year, orders on Laz-Mall, Lazada's business-to-customer virtual shopping platform, more than tripled year-on-year. Alibaba invested in Lazada in 2016 and acquired control of the company.

"In the past six months, we have seen an increase in new brands and sellers adopting an online retail approach, from food and beverages, to hospitality, recreation and personal services, as leading global and regional brands give their retail mix a digital overhaul," Liu said.

Since the pandemic emerged, the number of brands handled by Laz-Mall has tripled to more than 18,000 international and local names across the region, according to the company.

Many well-known department stores and malls, including Metro and Robinsons in Singapore and the Siam Center in Thailand, have also hopped on the digital bandwagon to help their tenants set up virtual storefronts through Lazada's platform.

In particular, Liu said the grocery sector has experienced exponential growth since the start of the pandemic.

For example, when Singapore raised its Disease Outbreak Response System Condition to the second-highest level of "orange" on Feb 7, that weekend, Lazada's grocery arm RedMart saw a three-fold rise in the average number of weekly orders.

On Nov 11 this year, Lazada even invited South Korean actor Lee Minho to be its first regional ambassador. It attracted more than 40 million users during its Singles Day sale, with its sales surpassing $100 million soon after the promotion began at midnight, less than half the time it took to reach this figure last year, according to the company.

The concept of the Singles Day online shopping festival was first promoted by Chinese e-commerce platforms and was introduced to Southeast Asian markets by Lazada in 2012.

The company is just one of many in the region's e-commerce industry to benefit from the pandemic.

In the first half of this year, the average value of an order throughout the region rose by 23 per cent year-on-year to US$28.50, according to a report by e-commerce aggregator iPrice, which is based in Malaysia.

The biggest gains － 57 per cent and 51 per cent respectively － were made in the Philippines and Singapore, according to the report, which was produced in collaboration with SimilarWeb and App Annie.

Shopee, which is based in Singapore, was the most-visited e-commerce platform in the city-state as of the second quarter, the report said.

From the first quarter to the second, the company saw an 82 per cent rise in the number of users, garnering close to an additional 5 million visitors on average in the second quarter alone.

In Indonesia, management consultancy RedSeer forecast that the gross merchandise value, or GMV, of the country's e-commerce sector would grow by 50 per cent year-on-year to reach $35 billion this year and would rise to $101 billion by 2025.

Tokopedia, based in Jakarta, the Indonesian capital, and also backed by Alibaba, said in a statement early last month that food and beverage sales have nearly tripled during the pandemic.

The company also found that the "new normal" of working and learning from home triggered a significant rise in sales of books and computers.

In Vietnam, 76 per cent of consumers said they had done more shopping online in recent months, according to a survey by digital marketing company Criteo.

In Thailand, e-commerce solutions company aCommerce reported year-on-year growth in new customers of between 150 per cent and 200 per cent during the pandemic.

" (The new customers) are not only limited to the tech-savvy generation, but also comprise the older generation, which you would not have targeted as a customer base as recently as last year," said aCommerce co-founder and group CEO Paul Srivorakul.

On its way to becoming Thailand's first unicorn － a startup valued at more than $1 billion－ aCommerce operates across Southeast Asia in markets such as Indonesia, Malaysia and Singapore.

The way in which e-commerce is conducted has also diversified, Srivorakul said.

Srivorakul added that social commerce is another growth channel, with brands offering their employees, influencers and store associates incentives such as commission to sell to their social networks.

Consumers in emerging Southeast Asian markets are conducting more brand research on social media, according to a report by the agency We Are Social, which is based in London, and Hootsuite, a social media management platform.

In Vietnam, the Philippines, Indonesia and Malaysia, nearly 60 per cent of internet users turn to social media for more information about brands. The global average is 42 per cent.

Liu, from Lazada, said other critical factors driving the digital shift and redefining the e-commerce shopping experience include livestreaming and the use of artificial intelligence and algorithms to provide better shopping services.

"Compared with last June, this led to more than 17 times the total GMV generated through livestreaming," she added.

The advent of livestreaming can also be a cross-border opportunity to connect China with Southeast Asia.

For Rachel Pang, the founder and CEO of online shopping portal Shopavision, increased digital consumption triggered by Covid-19 resulted in a "surprising opportunity" for her startup, which aims to be Singapore's first and only livestream-focused shopping site.

"Over the past four years, I've seen the growth of livestream commerce, as well as the new retail concept in China," said Pang, an observer of digital and business trends and a frequent traveller to China for market research.

"Livestream commerce can work here (in Singapore), just like it did in China."

Shopavision started its pre-launch marketing in December and is due to officially introduce its app before the end of this year.

During its first livestreaming session with a crab farm in Singapore, Pang said the portal helped sell live seafood on the spot, registering sales totalling $6,000 in just two hours, in addition to providing an educative and experiential tour of the farm.

More than 40 livestreaming shows were held during the three-month pre-launch marketing period, Pang said, generating over 400,000 views, more than $50,000 in sales and reaching 2 million people. The platform now has a team of 30 livestream hosts.

But until last year, Pang said nine out of 10 people she spoke to in Singapore were still unfamiliar with livestreaming.

"The number of online shoppers has hit a new high (during the pandemic)," she said.

With livestreaming on social media platforms such as Facebook becoming more common, she added that such broadcasts have the potential to drive marketing and sales.

Lazada's Liu said that even before the pandemic started, Southeast Asia was undergoing rapid digitalisation, and the contagion has accelerated this trend.

According to a report by Facebook and the global consultancy Bain & Co, 70 per cent of consumers, or 310 million people, in the region are expected to have gone digital by the end of this year － a figure previously forecast for 2025.

The region's e-commerce GMV grew by 23 per cent annually from 2018 to this year, faster than China's compound annual growth rate during the same period, the report said.

Liu said,"E-commerce is projected to grow to $300 billion by 2025, but has a penetration rate of less than 5 per cent among the 650 million people living in Southeast Asia."

She added that this presents huge opportunities for e-commerce companies.

However, she said the region faces a number of challenges in developing e-commerce, ranging from the lack of a logistics and payment infrastructure to numerous consumer preferences, as well as cross-border concerns.

Srivorakul, from aCommerce, said logistics infrastructure in markets such as the Philippines and Indonesia is still in its infancy and is expensive.

As digital marketing is a large part of e-commerce, he said surging demand for online shopping has created several opportunities for such businesses to acquire new customers more easily.

"Offline shopping will definitely grow back when the pandemic ends, but consumers will not forget the experience they have when doing their shopping online," Srivorakul said.

Pang, from Shopavision, who is eager to expand to other Southeast Asian markets such as Malaysia, Indonesia and Thailand, said she hopes to make livestream commerce an integral part of people's lifestyles in the region, as is the case in China.

"We are definitely interested in collaborating with Chinese partners and have lots to learn from them," she said. - China Daily/Asia News Network 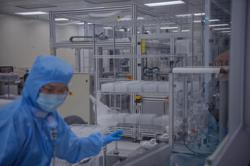